Blog from the RV Polarstern

Blog from the RV Polarstern 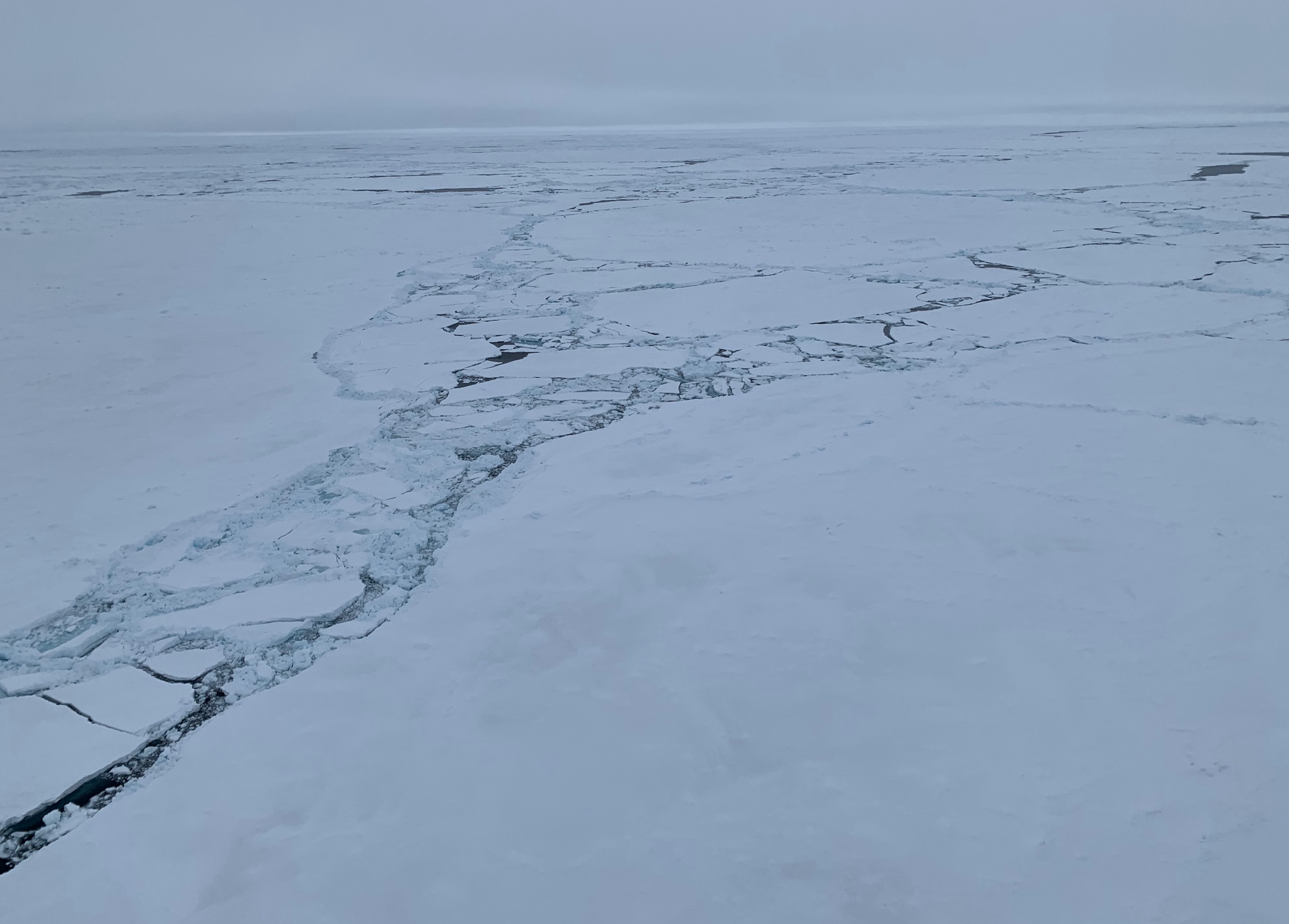 We are finally arriving at the end of leg 3. Today is now the official final day of this leg and the MCS will be closed. The transit south through the ice was for long parts difficult with a couple of days without steaming. During these periods the ice pressure was too strong for Polarstern to pass. Thick multi-year ice accompanied us until we reached the rim of the sea ice zone. We passed the ice edge finally yesterday (02/06) at around 23:30 with an impressive transition of ~80 to 0 % ice coverage within less than a kilometer. During the transit the slow ozone, the Tekran, the NOx/y system, and the GC/MAS were running continuously. Ozone and mercury showed normal background values throughout the transit. However, during large parts of the transit winds were low and often came from the bad air sector. Thus, many measurements were impacted by the exhaust during ramming or drifting and the data require some careful screening. All data recorded until 2 June were archived and stored in the MCS. A GMD flask sampling was performed on 30 May. We are currently steaming south with 6 to 7 knots to meet the Sonne and the Merian in the Isfjord close to Longyearbyen. We expect to be meeting both ships tomorrow morning. How the scientific hand-over will be done is not yet clear. Fuel bunkering and cargo transfer need to go on in parallel. The returning ATMOS team will be accommodated on the Merian. Depending on the hand-over we expect an arrival at Bremerhaven between 11 and 13 June. This is the last report for leg 3. 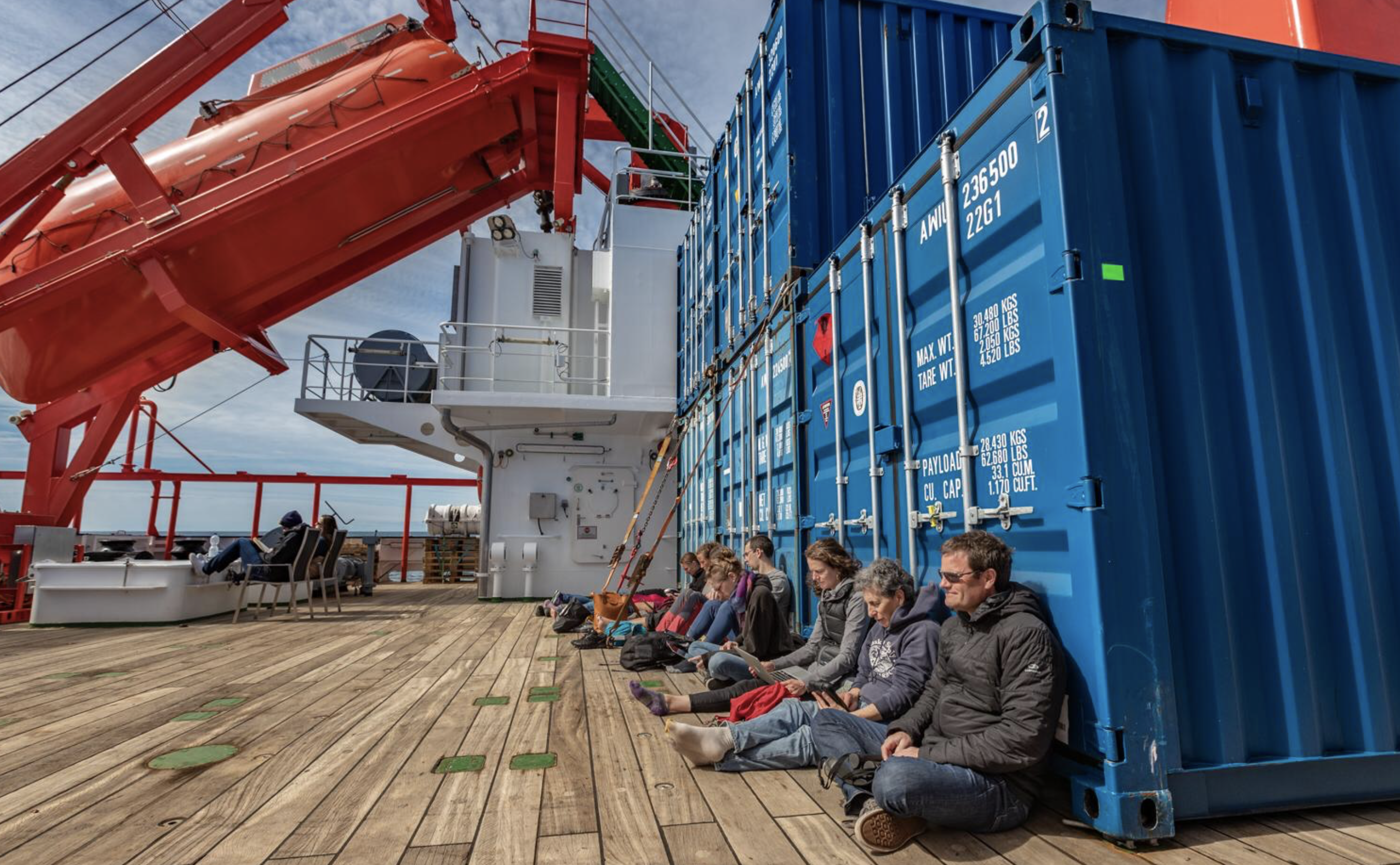 Since leaving the floe on Saturday (16 May) only the slow ozone, the Tekran, the NOx/y system, and the GC/MAS are running continuously. Some additional calibration tests for the NOy system were performed between 21 and 23 May. Flask sampling was done on 20 May. Data recorded until 21 May were archived and stored in the MCS, since the 22 May was initially the official end day of leg 3. Until this day leg 3 data could be stored in the MCS. However, leg 3 is still running and a new final day has not yet been determined.

When we left the MOSAiC floe we were at 83.4°N and 9.1°E with a distance of less than 320 nautical miles to the meeting point with the Sonne and the Merian in the Isfjord at Svalbard. Since then progress has been very slow with daily distances travelled between 3 and 12 nautical miles. We are in a multi-year ice zone with very variable ice thicknesses, but mostly thicker ice. Open water areas are rare and often cracks and leads are oriented west to east. We have had relatively calm weather, which also did not help to break up the ice. Two helicopter reconnaissance flights were performed, which helped to accelerate the ship. However, yesterday afternoon the engines were stopped again and we have been drifting with the ice since it is so compressed that the Polarstern cannot make significant progress. We need to be patient and to wait for more favorable ice conditions with less pressure on the ice.

The Sonne and the Merian arrived in the Isfjord on 25 May. It is now expected that we will meet them the earliest at the beginning of next week meaning that our arrival at Bremerhaven planned for 2 June will be delayed by at least one week. Currently, Polarstern is at 82.4°N and still at a distance of approximately 260 nautical miles to the meeting point. 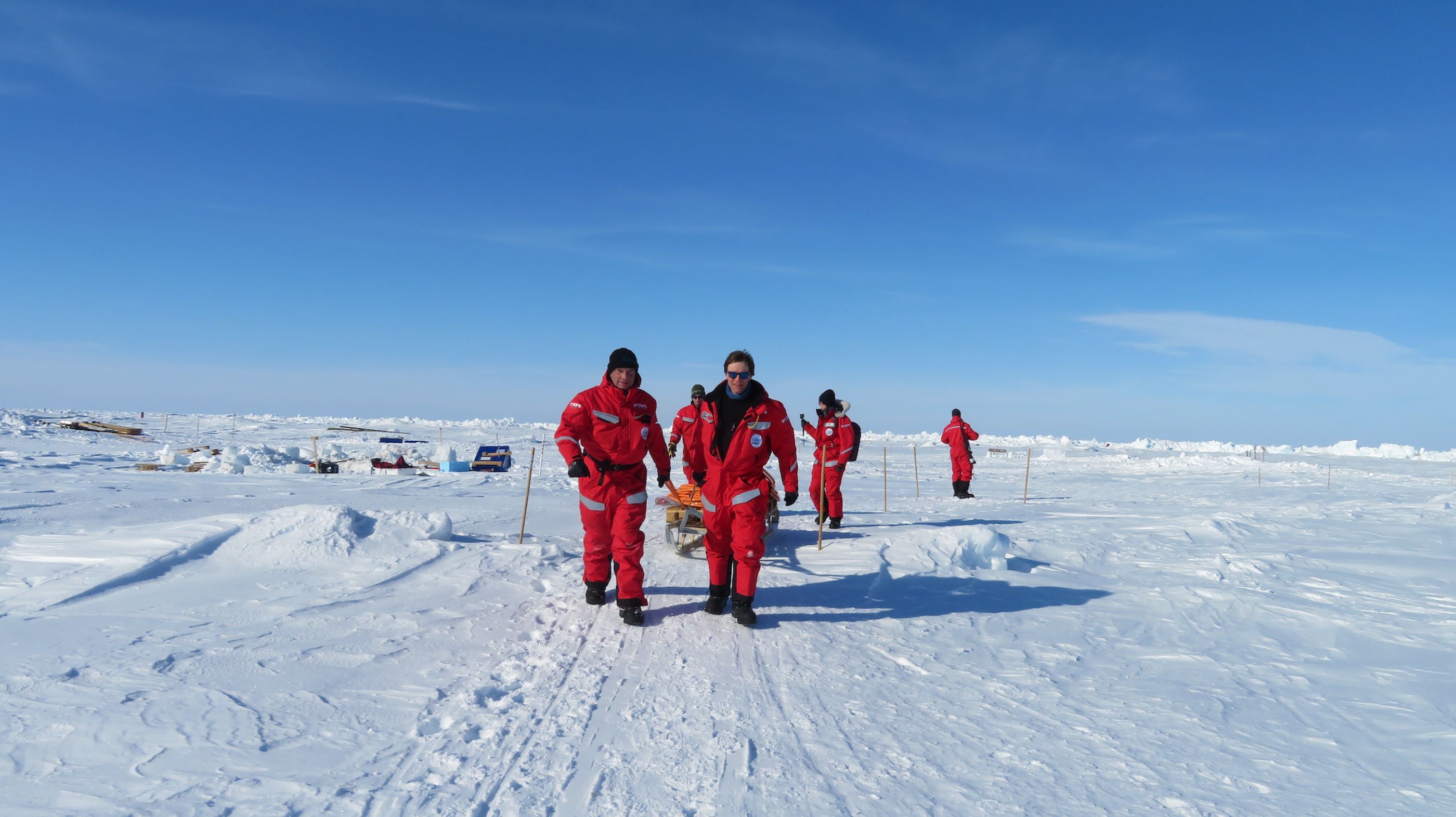 On Tuesday (05/05) the priority shifted from scientific activities to packing and preparation for the exchange with leg 4 since the floe will be left unattended for at least three weeks (photo, right: Julia Schmale). Access to MetCity was difficult all the time: either via the direct route, but crossing a number of cracks and climbing over ridges or making the detour close to the dark site, but still crossing a number of leads and ridges. Impossible to pull pulkas or even sledges all the way. The boxes needed for packing the equipment were flown out by helicopter on Wednesday (06/05). The equipment and the rack were prepared on the following days for the transport to the ship and flights were finally possible on Sunday (10/05). The initial plan was to leave the tower with a certain number of instruments running off a generator fed by two drums of gasoline. In that case, the ozone monitor would have been replaced by a small 2B instruments provided by Julia Schmale (U. Lausanne) for continuous measurements of ozone concentrations. However, on Saturday (09/05) a new crack between the hut and the tower was observed. Therefore, the ATMOS team decided to recover all the equipment, the instruments, the generator, and the fuel. This also included the inlet and cables for the gas flux measurements. Most of the equipment was flown back to the ship by helicopter on Sunday (10/05). Remaining parts including the tower were brought back by snow mobiles and sledges on Monday (11/05) making a long detour around the Dark sites since the meteorological conditions allowed no further flights. All our equipment from MetCity is safely stowed in the warm storage container (e.g. inlet lines) or on the deck, where the van is located (e.g. rack). 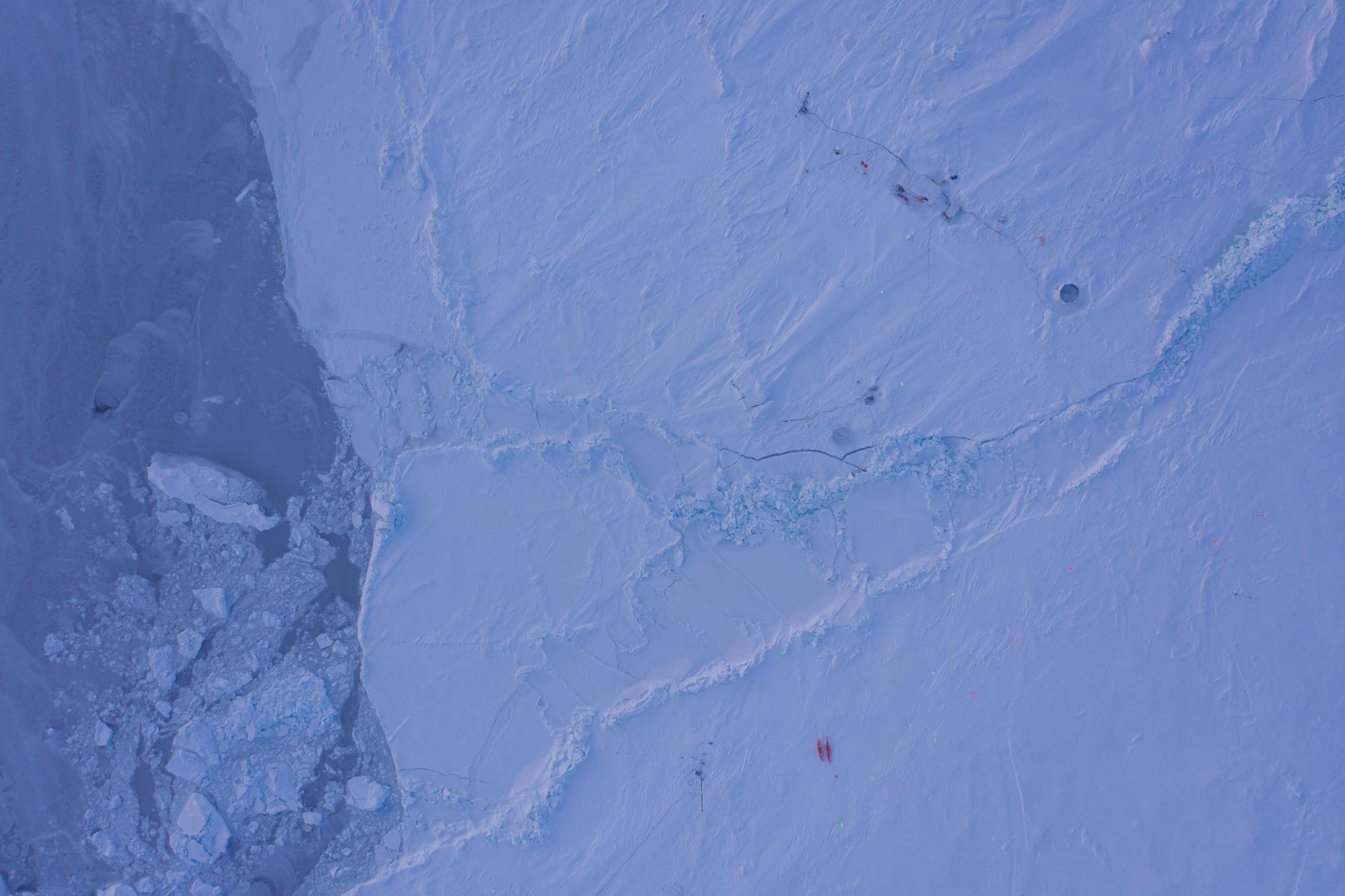 Although it was intended to leave a certain number of installations on the MOSAiC floe (like the Ocean City tent, the ROV tent, the large tent at Balloon Town, the hut at MetCity), most of it was recovered in the last week. The heaviest storm so far passed over the floe during the night from Tuesday (12/05) to Wednesday (13/05). Highest recorded 10min average wind speeds were above 25 m/s. As a result the MOSAiC floe further broke into pieces and is now completely scattered. New ridges and leads formed menacing the installations. For example, the ROV tent was destroyed by a new ridge. Therefore, it was decided to remove as much as possible from the floe. Since most of the installations were not accessible any more, Polarstern was relocated on Wednesday (14/05) to get again access to Ocean City, Ballon Town and the ROV site. All installations including tents and huts were recovered except the equipment that was already destroyed by the ice. Only some autonomous systems were left behind. The MetCity hut was supposed to be picked up after a new relocation of the ship. But on Friday (15/05) the hut was destroyed by a new ridge. (photo, left: Manuel Ernst)

The storm also impacted the bow mast. Due to the high dynamics of the ice, Polarstern became instable on Wednesday (13/05) and backed up. During this movement of the ship the lower two thirds of the mast broke off. The exact reason for this damage is not clear. Fortunately, the instruments, which were installed on the upper part of the mast, remained in place accept the 3D anemometer. Nevertheless, we were able to recover all instruments installed on the mast, but this stopped the onboard gas flux measurements and the Picarro and the fast ozone monitor were turned off. The instruments are safely stowed in the warm storage container or in the shelves of the working deck. If they are damaged due to the accident remains to be seen. The inlet lines were removed from the mast and are capped and fixed to the rail of the platform of the bow crane. The remaining instruments (NOx/y, slow ozone, GEM, GC/MS) are still operational and are running. Before the storm we had a period of 10 consecutive days with continuous measurements on board due to permanent wind from the clean air sector. During this period we encountered again different air masses with short periods of air masses from lower latitudes. Ozone concentrations were very variable and it appeared that we were sometimes in the area were active halogen chemistry took place. Sampling for the GMD and UEA flasks was done on 04/05 and 10/05. Despite the packing we were able to perform flights with the tethered balloon on Tuesday and Wednesday (05 and 06/05). These flights lasted the full day and included several ascents and descents.

On 09/05 the data of all instruments were harvested and transferred to the ship’s central storage. 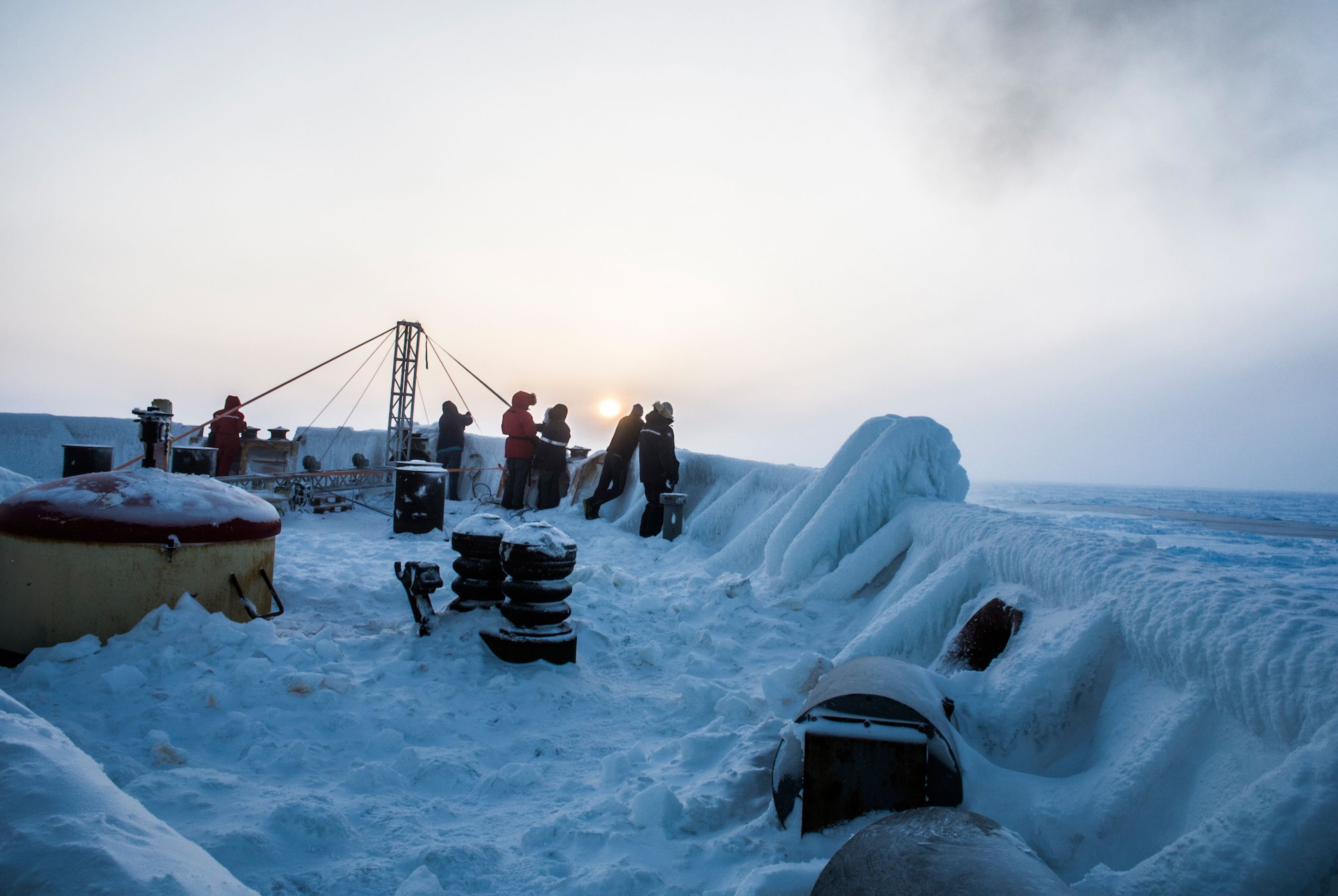 We finally left the MOSAiC floe for good on Saturday (16/05) late in the evening after performing a deep CTD. Since then, Polarstern has been ramming the ice, but progress has been very limited: approximately 3 nm after a full day of ramming. Currently, Polarstern is at 83.3°N with an estimated distance to the marginal ice zone of around 240 nautical miles. We expect arriving at the meeting point with the Sonne and the Merian close to Longyearbyen on 23/05. Currently the distance to the meeting point is 314 nm. After a quarantine of two weeks the crew and the science party for leg 4 boarded the two ships this morning in Bremerhaven.