Season's Greetings from the Polar Regions!

MOSAiC scientists and crew currently on the Polarstern will spend the holidays away from their friends and family in the dark and frozen Arctic. But things could be much worse for them...

In December of 1895, Fridtjof Nansen and Hjalmar Johansen of the famed Fram expedition (1893-1896), found themselves on the northern tip of Franz Josef Land waiting out the cold, harsh Arctic winter after a failed attempt to reach the North Pole on foot. In his diary, Nansen writes:

"Now the bells of home are ringing the feast of Christmas in...This is the time of rejoicing, and there is feasting in every cottage at home... But we are celebrating in our modest way. Johansen has turned his shirt inside out, and is also wearing his outer shirt underneath. I have done the same; but I have also changed my underpants and put on the others which I had wrung out in warm water. I have also had a complete wash down in a quarter of a cup of warm water using my discarded underpants as sponge and towel. I now feel like a completely new man - my clothes do not stick to my body as much as they did."

Look inside the Fram and learn more about the 1893 Arctic expedition in this immersive Google Expedition!

Can you spot it?

There is something in the video above that MOSAiC participants aboard the Polarstern will never see. Can you find it?

Submitted question: How do you feel being so far from home?

“Being from Australia, I’m a very very long way from home, here near the North Pole, and I’ll be away from home for 6 months. It’s very difficult because we can’t see the people we love, no matter how bad our day has been or how upset they are feeling.  We can’t celebrate the special times or be there to help them through the tragedies. We are living in what feels like a totally different reality here, a little bubble defined by work and coworkers, which makes it easier in some ways. However, back home our families are living their normal lives, but acutely feeling our absence, a void, in everything they do.”

Ships Passing in the Polar Night 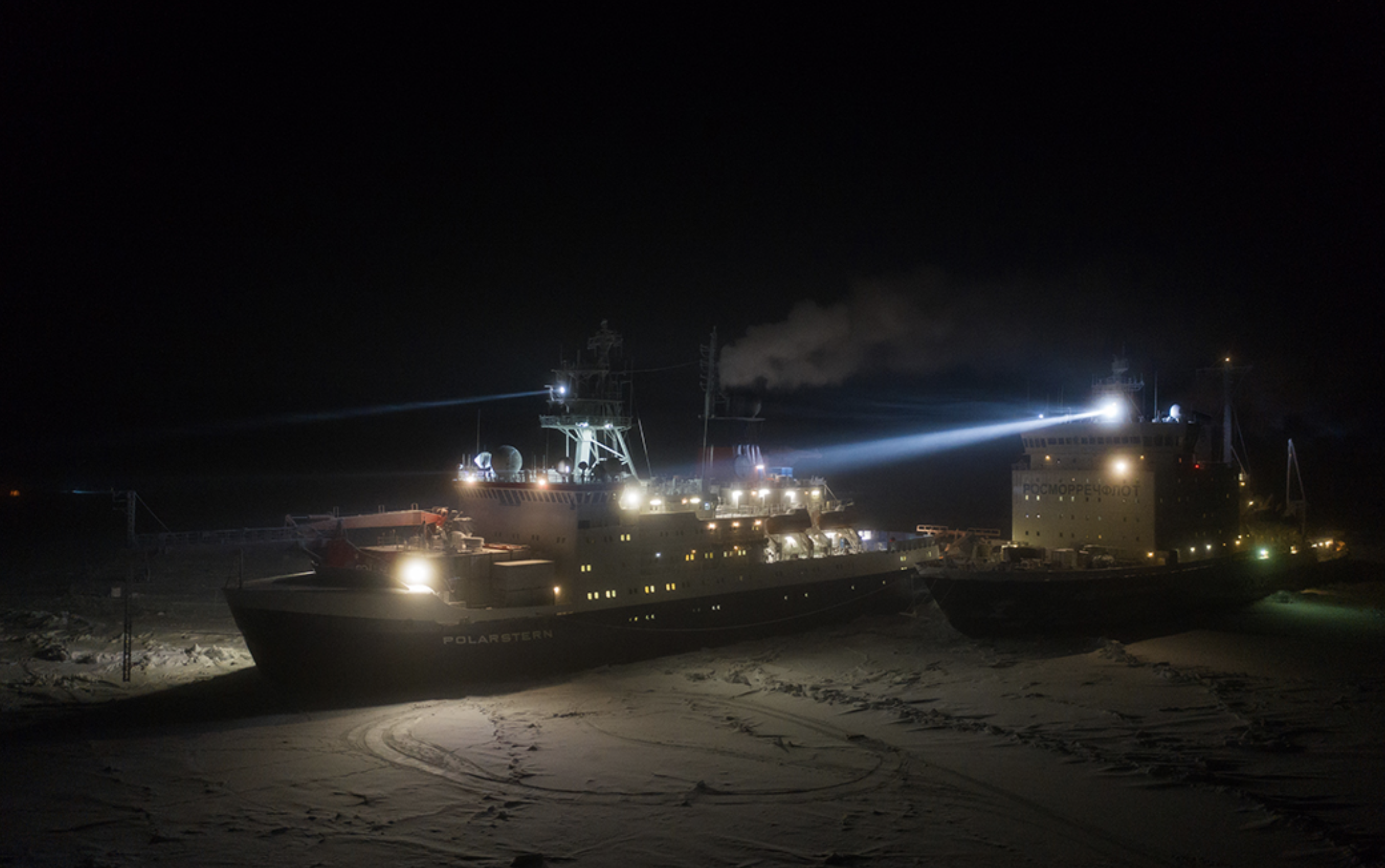 The Russian support icebreaker Kapitan Dranitsyn arrived at the Polarstern last week. Over the course of 5 days, ~100 people and supplies were traded between the two ships. A new batch of MOSAiC participants will begin Leg II of the expedition having never actually seen the ice floe they are frozen in in any kind of daylight. Photo credit: Esther Horvath/AWI

MOSAiC Leg I in Numbers

As Leg I ends and Leg II begins, MOSAiC participants from the Alfred Wegener Institute share some highlights from the first leg:

There have been polar bear sightings on 9 days, including sightings of lone bears, and of mother bears with one or two cubs each. As a result of these sightings, or approaching storms, the ice floe has been evacuated at short notice roughly half a dozen times. And there were other days on which the presence of bears or storm conditions made it impossible to go out on the ice at all...To date, MOSAiC participants have spent roughly 500 hours working on the ice. Temperatures bottomed out at minus 32 degrees Celsius; the ocean temperature is currently minus 1.5 degrees Celsius at the surface. More than 5 kilometres of roads were created on the ice’s surface. The research camp on the ice floe consists of 100 tonnes of equipment. ~20 terabytes of data have been gathered. The researchers and crew have consumed 12.7 tonnes of food. 125 buoys...have been deployed. 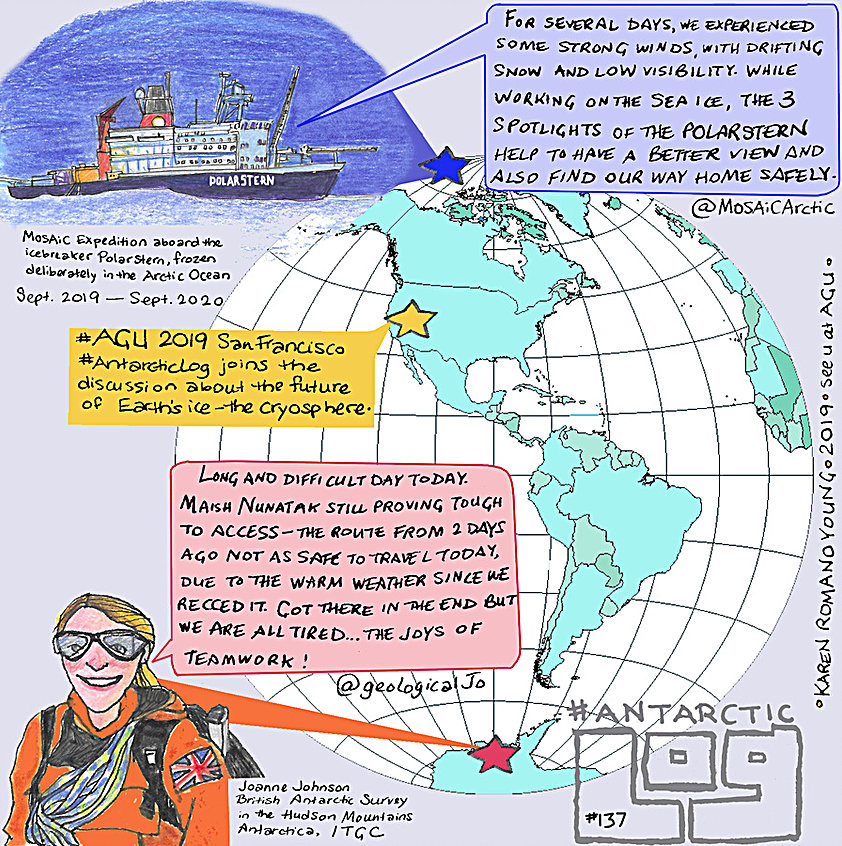 Every year in December, tens of thousands of scientists, educators, journalists, and more from countries all around the world convene for the American Geophysical Union's (AGU) Fall Meeting to share and learn about all things geoscience. For this year's Centennial meeting, MOSAiC made several appearances at educational workshops, posters, talks, and even a press conference! Cartoonist Karen Romano Young was at the AGU Fall Meeting and captured the MOSAiC expedition in one of her #AntarcticLog comics.

You can watch a recording of the AGU MOSAiC press conference, where journalists connected with MOSAiC expedition leader Markus Rex and expedition co-coordinator Matt Shupe on the Polarstern via satellite phone and heard from a panel of MOSAiC scientists: Melinda Webster from the University of Alaska Fairbanks, Sally McFarlane from the U.S. Department of Energy, and Stephanie Arndt from the Alfred Wegener Institute.

Lectures, videos, podcasts and workshops: during the upcoming year, follow the MOSAiC School outreach activities with the MOSAiC Ambassadors' Corner.

This month, discover two amazing videos from our Ambassadors: