Our Commitment on World Oceans Day and Beyond

Today is World Oceans Day, which is a day for people around the world to celebrate and honor the ocean and to work together to protect and restore our shared ocean.

However, making progress on the conservation front must include removing the barriers and structures in place in our society that have for so long oppressed Black, Indigenous, and People of Color (BIPOC). We must work as individuals and as collectives to dismantle the systemic racism in our society and to combat racial injustice. Environmental justice is interconnected with social justice. We recognize that those whose voices have been the most minimized are the ones most negatively impacted by environmental degradation, natural hazards, and climate change. Therefore, in our efforts to be active participants in the anti-racist movement, we at MOSAiC Monday commit to amplifying the voices of BIPOC in science and conservation. We welcome your feedback on how we can be more conscious and active participants in the anti-racist movement and in supporting BIPOC communities: mosaic@colorado.edu.

In 2017, Danielle Perry, who was at that time a PhD student in Biological and Environmental Science at the University of Rhode Island, wrote an article to share her experience as an African American woman in marine science. In her article, Danielle also interviewed two other minority students at URI about their experiences as marine scientists. A prominent theme in this article is minority representation in STEM. In reading this article, we encourage you to think about what barriers are in place for minority students pursuing STEM degrees and careers, and what steps universities and institutions could take to remove those barriers.

Oceanbites Article: Diversity Within Marine Science: We Can Do Better

In this Washington Post article, marine biologist and policy advisor Ayana Elizabeth Johnson describes how racism and efforts to fight climate change are intimately interconnected. Black and Latinx Americans are more concerned about climate change impacts than white Americans, and they disproportionally bear the impacts of climate change. But being able to take action is impeded by structural and systemic racism. In the words of the author, "How can people of color effectively lead their communities on climate solutions when faced with pervasive and life-shortening racism?"

Washington Post Article: I’m a black climate expert. Racism derails our efforts to save the planet.

Are you a Black, Indigenous, or Person of Color who would like to share your experiences in science and conservation or related to environmental justice in MOSAiC Monday? Do you have feedback for us on how we can better amplify BIPOC voices? Email us: mosaic@colorado.edu

Where is the Polarstern? MOSAiC Expedition Update 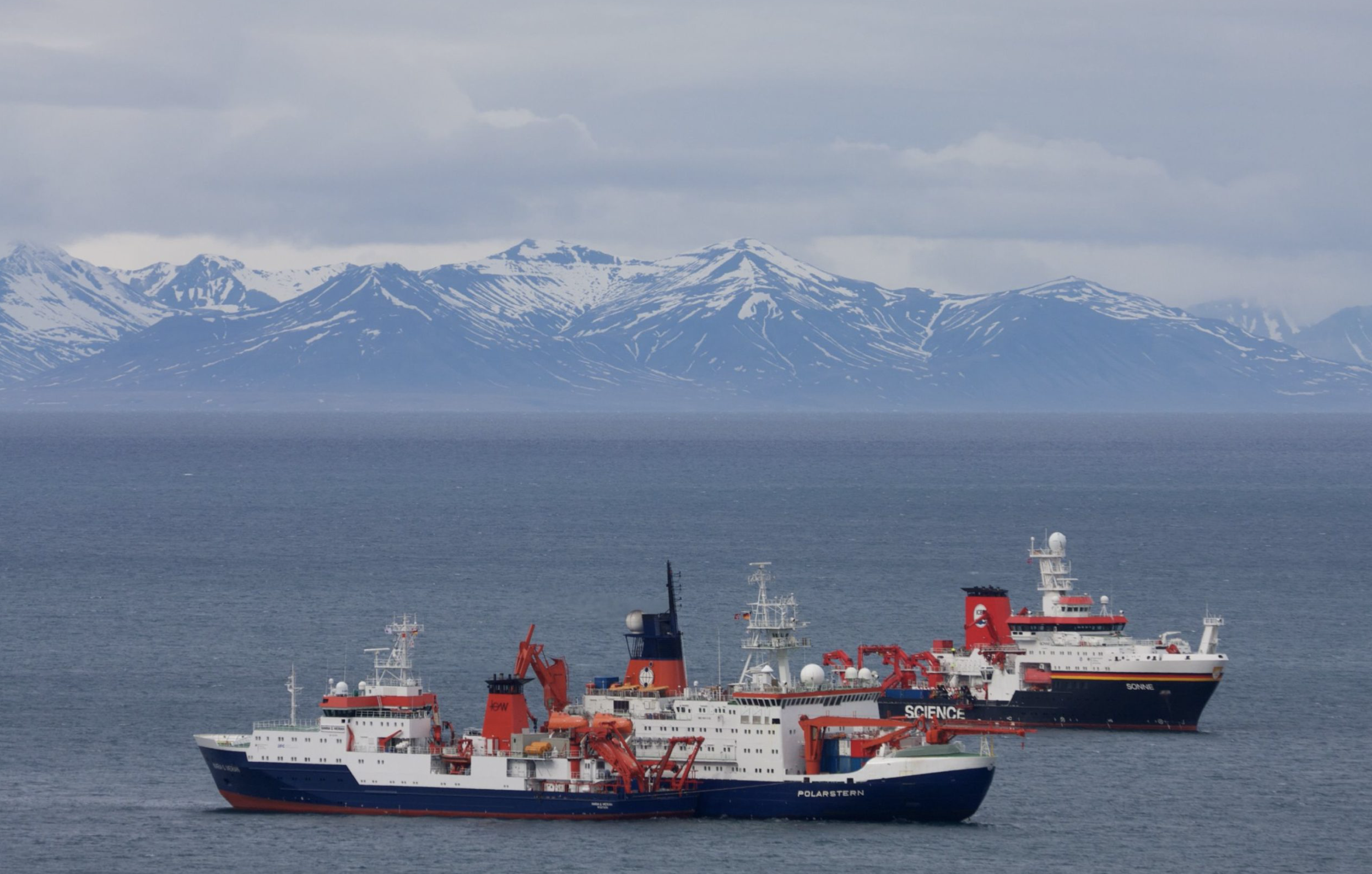 To celebrate World Oceans Week, we're bringing back some of our favorite MOSAiC Monday segments related to the oceans:

If you were to look at a map or a globe, you would notice that all of Earth's oceans are connected - in fact, it's perhaps most accurate to say that Earth has one big global ocean that covers over 70% of Earth's surface, but for ease of talking about things geographically and other reasons, we tend to split up this global ocean into five smaller regional oceans: the Pacific, Atlantic, Indian, Southern, and Arctic Oceans. 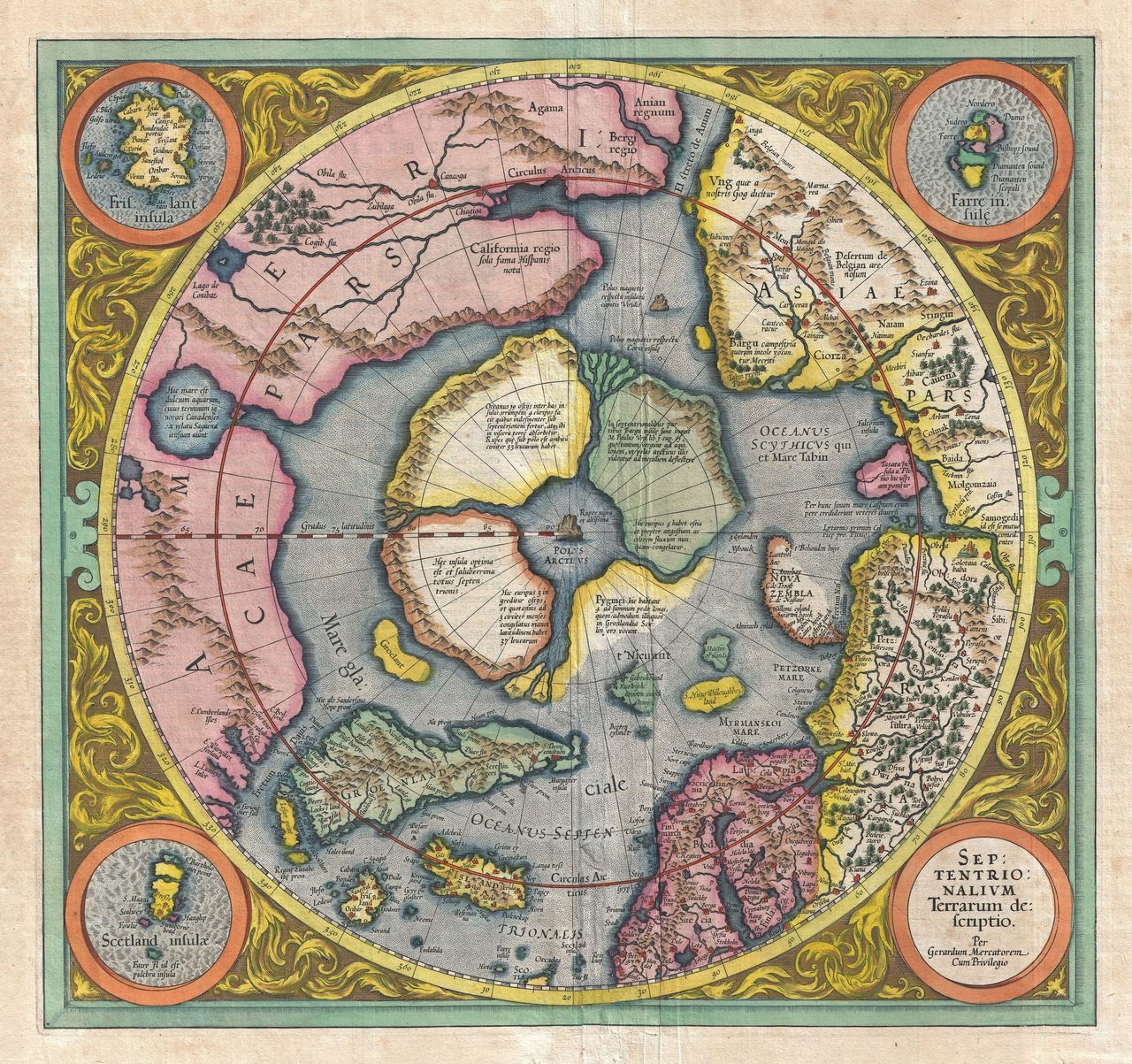 Did you know that as late as the mid to late-1800s, people still didn't know exactly what lay at the North Pole? There were all sorts of wild theories - some believed that a warm current flowed up from Japan through a thin ring of ice surrounding the Arctic and in to a vast open sea at the pole. Some thought land lay underneath the Arctic ice. Several attempts were made by expeditions in ships to try to unravel the mystery, only to be either crushed or detoured by the unforgiving Arctic sea ice. This is indeed the tragic story of the USS Jeannette, which was crushed by ice and sank in 1881 during an attempt to reach the North Pole, although the voyage of the Jeannette did lay to rest the Open Polar Sea theory. And it was sounding data from Fridtjof Nansen's 1893-1896 Fram expedition that showed that beneath the Arctic sea ice is not land, but rather a vast ocean. Image (R): 1606 Map of the Arctic by Gerardus Mercator, which features a giant magnetic mountain at the North Pole.

We now know that the Arctic is an ocean surrounded by land - an ocean that is covered by sea ice to some extent all the time (although that is changing as Earth's climate warms). The Arctic Ocean is the smallest and shallowest of the world's five major oceans, as we've defined them. But it plays an incredibly important role in Earth's climate system and supports a rich ecosystem of life adapted to extreme conditions, which we'll get into more over the next couple of weeks.

Up, Down, and All Around

Have you ever noticed that things like salad dressing, if you let them sit for a bit, separate out into different layers? If this doesn't sound familiar to you, you can recreate it by pouring a bit of cooking oil and water into a clear glass and seeing what happens, or follow the link below to make your own rainbow in a jar. Photo credit: Steve Spangler Science

Hands-on Science at Home: Create your own 7-layer rainbow in a jar

How can one liquid 'float' on top of another? The story here is all about density - just as solid objects that are less dense than water will float in it, less dense liquids will float on top of more dense liquids. This simple law of physics turns out to be the driver of a global ocean conveyor belt that has a big impact on global climate.

The Ocean's Propensity for Density

The two things that have the biggest influence on ocean water density are temperature (amount of heat in the water) and salinity (how salty the water is, or how much stuff is dissolved in it). What do you think is more dense: cold water or warm water? What about salty water vs. fresh water? 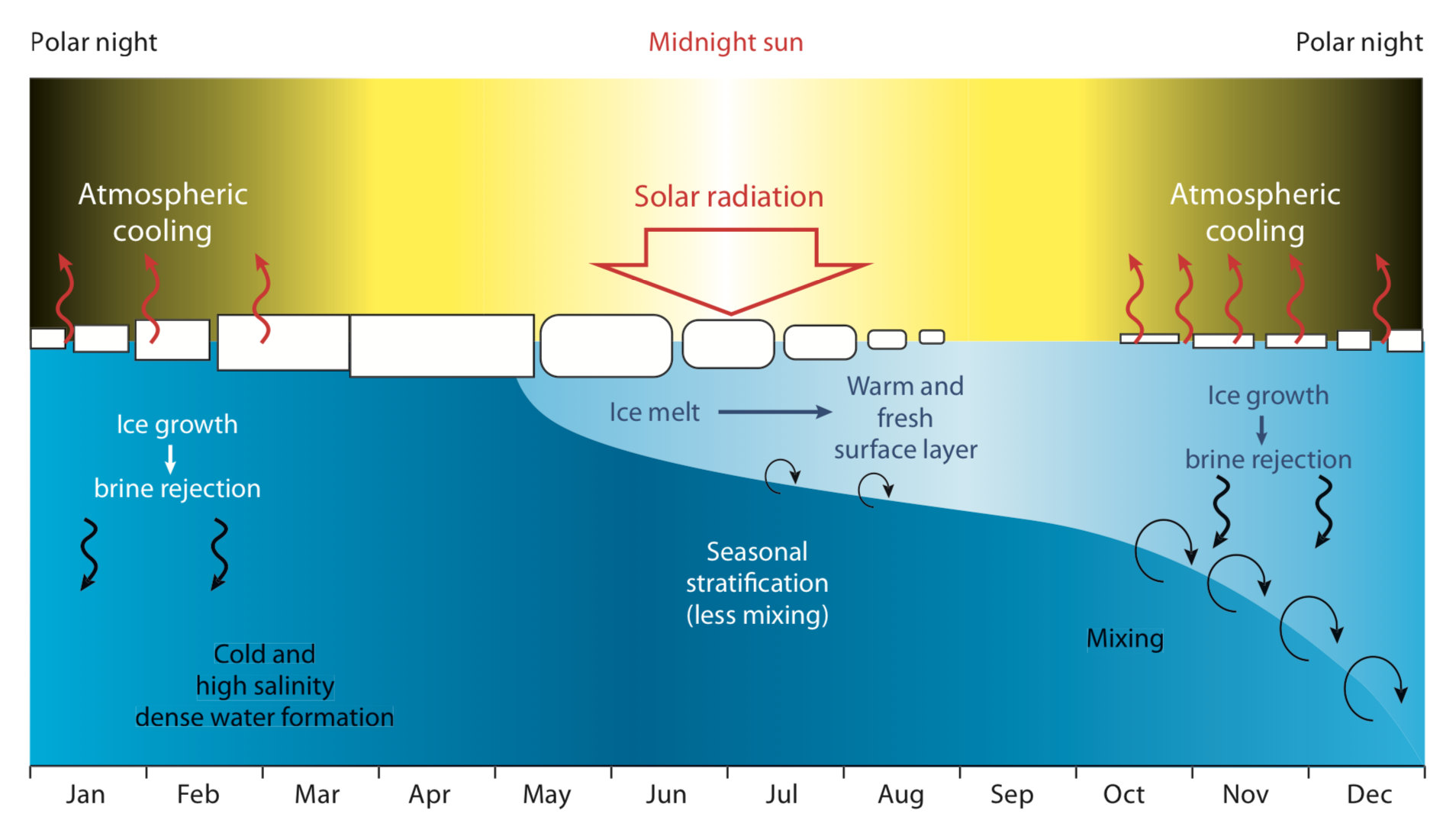 The density of sea water is often different as you move from the surface to depth, and these differences can determine how ocean water behaves. If less dense layers are already sitting on top of more dense layers (a stable situation), nothing will really happen or change - in other words, the layers won't really mix with one another. But if more dense water suddenly ends up on top of less dense water, the denser water will sink, which will start the flow of a current in the ocean. In fact, this phenomenon of water flowing up and down and all around because of differences in density occurs on a global scale and is called thermohaline circulation, or the global ocean conveyor belt. More on this below...

Figure (L): What happens at the ocean's surface in the Beaufort and Chukchi Seas seasonally influences what happens below. In the winter, sea ice formation results in cold, salty water forming at the surface and sinking. In summer, ice melt results in a warmer, fresher, less dense layer of water at the surface which keeps the ocean pretty stratified (not a lot of vertical flow or mixing of water). Figure credit: Peralta-Ferriz and Woodgate, 2015

What Happens in the Arctic Travels the Globe 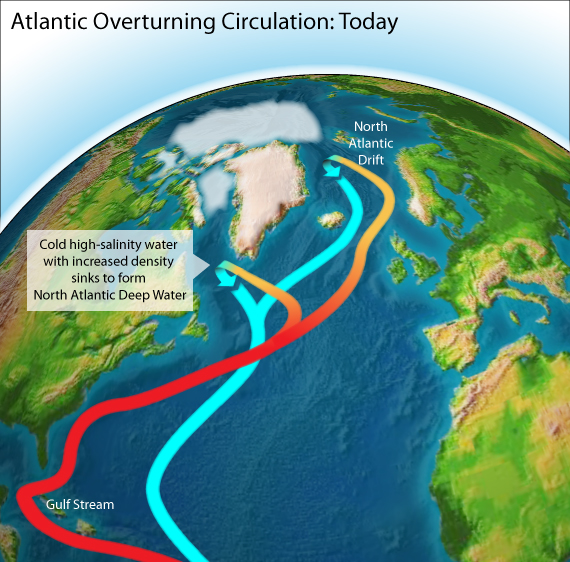 The Arctic plays an important role in driving thermohaline circulation - when winter rolls around in the Arctic, the water at the surface freezes into sea ice, but it leaves the salt behind. The ocean water underneath this sea ice becomes denser because it is more saline, so it sinks and draws surface waters in to replace it. Two key places where this happens is in the Labrador Sea and off the southeast coast of Greenland. Figure (R) credit: Illustration by jg. Source for Earth's topology: NASA/JPL-Caltech

Watch the video below to see how cold, dense water sinking in the Arctic drives the flow of water around the globe. Thermohaline circulation is often called the 'global ocean conveyor belt' because it carries with it various things, like heat, and distributes them around the globe. If this didn't happen, Northern Europe's climate would actually be several degrees colder on average than it is. What do you think could happen to global ocean circulation and the climate of places like Northern Europe if sea ice were to disappear in the Arctic?

The Arctic and global ocean circulation

As you watch this video, keep a look out for places where water moves up and down in the ocean. When you see it happen, pause the video and write down your hypothesis for why you think this is happening. If water is moving up towards the surface ocean, what must be happening to its density, and what might be a reason for this?

This question was submitted by Brooklyn from Middleton Middle School: What do you enjoy most about doing the MOSAiC expedition? 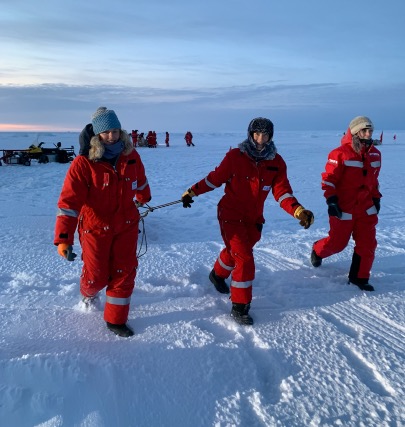 "There are three things that I really enjoy: The people, we are a fantastic team, working and solving problems together, learning from each other and having really nice conversations. The Arctic, it is such a beautiful place, the icescapes are changing permanently, we can see and hear the ice moving. The science, we are collecting so many "firsts" and it is a pleasure to try and understand what we record."

Our friends at Reach the World have put together a series of fun and engaging events that you, your students, and your kids can participate in this week to celebrate World Oceans Week:

June 10th: MOSAiC Video Chat with Exploring by the Seat of Your Pants

Join our friends at Exploring by the Seat of Your Pants on June 10th at 12:00 pm Eastern Time when they'll be hosting a live video chat with MOSAiC scientist Taneil Uttal! Taneil has been studying the Arctic environment for over two decades, and recently returned from her time on board the Polarstern.

Tune in to a live screening of the youth documentary "Against the Tide: a Journey for Climate Hope" on June 9th at 3:30 pm Eastern Time.

RSVP for the screening to receive a meeting link via email

Learn more about this event and others at UNWorldOceansDay.org

These online courses are free, self-directed, and interactive for students in grade 3 to 12, and anyone who is interested in learning more about the ocean. Students can take the course at their own pace, and earn exciting badges for every accomplishment they make throughout the course.