Can you solve these MOSAiC expedition math problems?

Race to the North

Cracks in the Ice

On March 9th, MOSAiC participants reported that a large crack, or lead, in the ice opened up about a mile from the Polarstern. The lead was about 3 miles (~5 km) long and about 545 yards (~500 m) wide. How much of the ocean's surface area was exposed by the opening of this lead? Remember that there are 1,760 yards in 1 mile.

BONUS: Ocean water absorbs more of the sun's heat than ice, which is very reflective. Why might we care about the size of leads and areas where the ocean is exposed in the Arctic? (Hint: Think about the Arctic climate system.)

Spuds on a Ship

On Thin (or Thick) Ice 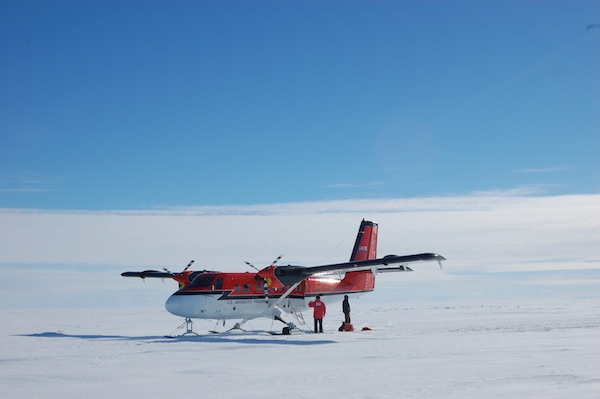 First, make a guess as to what you think the minimum thickness the sea ice underneath the runway must be to support the plane.

Then, calculate the actual minimum thickness the sea ice underneath the runway must be, assuming that the MOSAiC team wants it to be able to support a Twin Otter plane that weighs ~8,000 lbs. Does the answer surprise you? Is it similar to or different from what you guessed?

Find out how thick the ice under the runway actually is

Can you use the MOSAiC weekly tracking numbers in the data tables below to answer the following questions? Challenge Levels: I (Low) - V (High)

Location of the Polarstern:

Level I: How far (linear distance) did the Polarstern drift between November 11, 2019 and March 9, 2020? To determine this, use an online lat/long distance calculator, such as NOAA's Latitude/Longitude Distance Calculator tool. For an EXTRA challenge (Level V+), explore calculating this by hand using trigonometry.

Level III: What is the average temperature that participants on the Polarstern have experienced thus far?

Level IV: Do you notice any relationships or correlations between length of day, air temperature, and sea ice extent? If so, what do you notice?

Level V: What has been the average rate of change of sea ice growth in the Arctic from sea ice minimum to sea ice maximum?