Challenges in the field

Challenges in the field 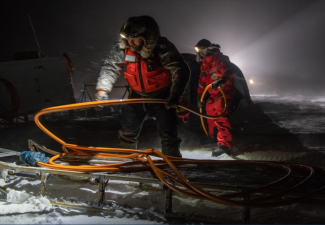 By Sara Morris, CIRES and NOAA, who pieced together information from several of her colleagues aboard the ship.

The Atmosphere Team’s flux stations, part of the distributed network, are doing great, overall, although we had one disruption that involved a polar bear. It appears that the bear was curious about our setup and was most intrigued by the exhaust system (which exhausts water). Maybe the bear liked the water coming out of the system, and in trying to take a drink, ripped the exhaust system from the instrument suite? One way or another, we have snapped cables and a dismembered exhaust system to repair.  We are working to rig new connectors and cables, and have ordered a new exhaust pipe that will hopefully arrive with the next leg of participants in December.

Thanks to a major storm in the last few days, we have also had lots of cracks around the ice, and one has opened up so wide that in order to get to our instruments, one has to use a kayak to cross to the other side. In light of all of the movement, the 30 meter tower has tipped over. An assessment of the instruments and damage done to the tower are still on-going. Our other 11 meter tower is still standing tall, but another smaller crack has opened beneath one of the guy-wires that holds up the tower. All in all, field work will always be challenging, especially in such harsh conditions. Just when you think you've seen it all, a polar bear throws you a curveball... or in our case, an exhaust pipe.