Heading Home in the Dark

Heading Home in the Dark 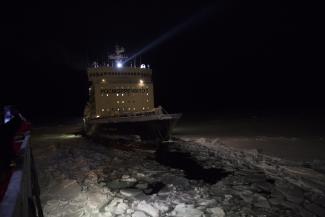 Dave Costa, CIRES/NOAA - CIRES/NOAA scientist Dave Costa is one of several CIRES scientists nearly back to land after spending months at sea during Leg 1 of MOSAiC. In this post from the last few days in December, he describes the sometimes-tedious journey home.

From the bridge of the Kapitan Dranitsyn, we can only see as far as the spotlights can reach. It's all ice as we approach a ridge. This has pretty much been the scene most of the time, for days and days. Sometimes it's clear and you see a spot on the ice, but nothing else, just black. I imagine if you are claustrophobic you might get some anxiety.

Yesterday (December 26), there was an aurora. I saw it late and only briefly.

Today we hit what looked like a 20-meter wide rubble field that stretched as far as I could see and the ship came to an abrupt stop. The crew reversed the propellers to back up and then forward, searching for a weak spot and ramming. It took about five tried then eventually the bow broke through and the middle of the ship got stuck on the wide rubble field. The crew had to fire up another engine and move the fuel from side to side, eventually freeing the ship.

Now we are sailing through some pancake ice. And I was on the helicopter deck checking the aurora. Guess what.? It's super easy to find the North Star. Just look up. ?