L3 Down! Tipped by Ice Movements

L3 Down! Tipped by Ice Movements 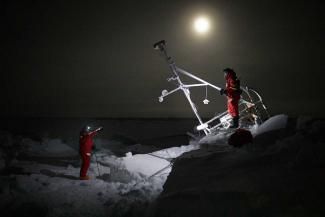 Moonlight-illuminated work to re-right a station tipped over by ridging. Image by Michael Gallagher/CIRES & NOAA

MOSAiC team members Michael Gallagher (CIRES & NOAA) and Taneil Uttal (NOAA) were on site fixing the ASFS (atmospheric surface flux station) at MOSAiC's L3 site when they heard the ice making noises. This station is in a very dynamic location, with local ice movements, cracks, and open water, all of which are important to measure and understand. But alas, those ice dynamics can also pose a big challenge for operations. Just a couple days after the team finished their fixes on the L3 station, the ice came crunching together and formed a large pressure ridge right underneath the system, pushing the sled up into the air before it came tumbling down on its side. Some instruments were broken, but amazingly many survived. In the past days the on-site team has spent many hours chipping ice and using winches to get the station back safely on "stable" ice..... but now the longer process begins of fixing damaged parts and re-deploying the flux station. Below is a note from Michael Gallagher, when first assessing the mess, and before-and-after pictures by Michael Gallagher on January 29, and then February 6, 2020. 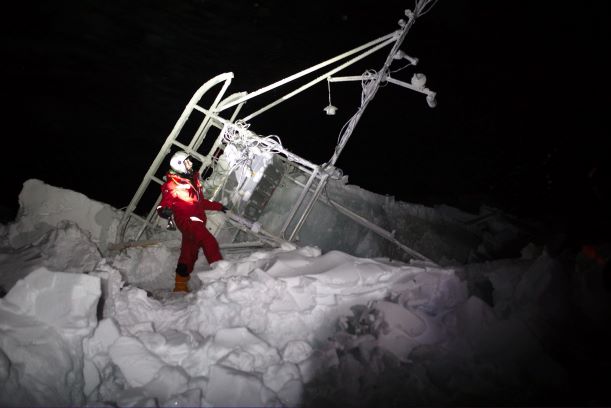 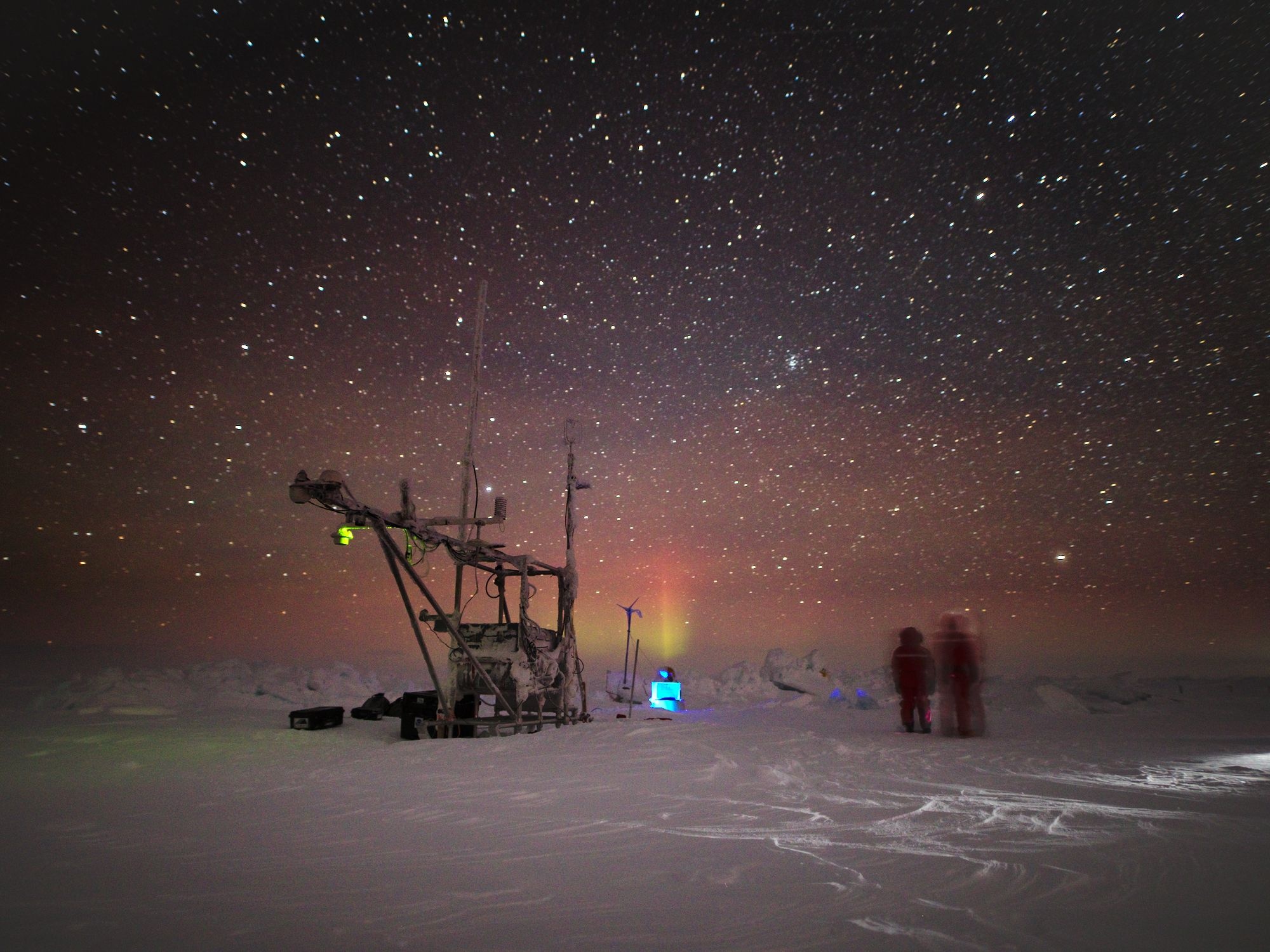 It had to have happened in the last 24 hours. The box was still mostly snow free and vaguely warm. It will be really interesting to look at the data and see how quickly it happened, the pings don't come with tilt information. The unfortunate part is that we had been wanting to go for the last 4 days but the helis were grounded.

Unfortunately the boom equipment is in rough shape. Based on the up-close inspection it looks like the sled took a roll tumble before it pitched up and back like is seen in the photo. To this end, the radiation mount is rotated roughly 90 degrees out of its installation position. Meaning it either took a hit or got rolled over on. However, somehow, the domes are fully in-tact and appear to be undamaged... even the metal shields somehow. The met sensors are torn up really bad, either unsalvageable or close-to-unsalvageable. The sonic is... really dead, partly under ice chunks so hard to assess further. Same for the radio antenna. The good news is that the position of the sonic and the radio antenna means that the licor actually looked ok-ish. As for anything in the box, we unfortunately don't know because the open-up side of the box was pinned against a behemoth of an ice-chunk and we couldn't get in. If the sled really did roll (or at least fall over) like I think it did, the internals likely didn't fair well. Although somehow most of the cabling looks pretty good, or at least the rats nest entering the grey box didn't get torn up.

Of course, any of this could change if the ice moves more.

Maybe the most unfortunate part is that we landed, saw the condition of the sled, took some pictures, and then got called back to the ship. We likely could have moved it and at least pulled the efoy/interface box if we had time... but the weather office called the heli back in due to increasing low level clouds/fog. We were probably there for a total of 15 minutes.

The whole region is pretty unstable. There is one tranquil piece of ice (where the snow buoy and others are) that's about 50mx50m but who knows if it will stay that way. One thing worth mentioning is that the heli-pad is now a non-existent maze of cracks and rafted ice pieces. They lost a landing light in the chaos.

We of course have a plan to get back ASAP and get things in order. My priority list is as follows: Pull the EFOY (fuel cell), batts, interface box, radiometers and maybe the licor... carefully right the sled on the skis and out of the way of imminent doom for further assessment. I think think this would be a good start but it's looking like flight conditions will be poor the next few days. So we'll see when we can get out and then *if* we do get out, how much time we will actually have at the site.

Feel free to ask more questions or send suggestions, we'll do our best to make the best of the situation.