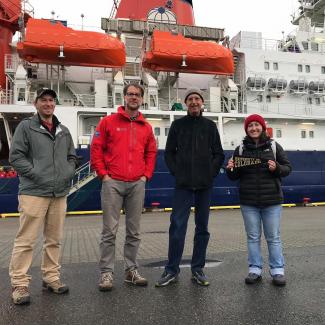 Just a quick note to update you on our progress and general conditions. Hope to send one of these each week from now on. We have no direct internet access, but I can be reached directly at [deleted email address] during the cruise leg. Message sizes are limited to 50 kb, so no large attachments and please try to avoid repeating the entire email thread with each reply.

By the closest of margins, we managed to get all of our equipment and supplies loaded on a ship. Federov delayed departure by about 1/2 a day after Polarstern had left to collect our compressed gas standards, which arrived very late. That was a close call and I'm thankful to Markus Rex for organizing a delay to be sure the standards were loaded.

We are currently sailing NE, just north of Novaya Zemlya, on course to round the N tip of Komsomolets Island in a couple days. Shortly after that we will turn N to the ice edge, recover a seismographic mooring, and then proceed into the ice pack, looking for a suitable site to park the ship for a year.

Jacques and I are working on the instruments in the container lab. Steve is riding on Federov and will switch with Jacques when Federov completes the remote node deployment and returns to Tromso. I'm sure there will still be a daunting amount of work on Polarstern and in the ice camp for Steve and I to complete after that, and it will be a several weeks before we can hope to have everything running as planned.

Conditions on Polarstern are very crowded. Everyone is relieved to have the planning and shipping logistics behind us, but most are also a bit intimidated by the magnitude of the task before us.

That's it for now.  More later.