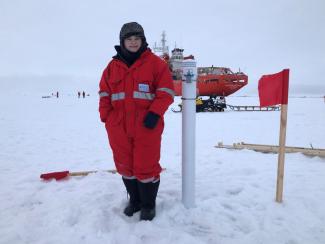 My name is Ryleigh Moore and I am an applied mathematics PhD student at the University of Utah. I currently study the evolution of Arctic melt pond geometry for one of my research projects and I am also working on numerical solvers for high dimensional stochastic differential equations. Currently, I am a student of the MOSAiC school and I also led the deployment of three seasonal ice mass balance buoys in the distributed network. During my time at the MOSAiC school, we have had the opportunity to model sea ice drift as a group with Thomas Rackow (YOPP/AWI), and I have worked with Thomas Krumpen (the cruise lead from AWI) to track sea ice floes on satellite imagery.

The process of predicting and tracking sea ice floes plays a crucial role in many of the puzzle pieces that must fit together for the MOSAiC expedition to be a success. Perhaps the largest piece of the puzzle is selecting THE floe that the Polarstern will spend the entire year drifting with. The ideal floe will exit out of the Fram Strait towards the end of 2020; however, the stakes are high because if an inadequate floe is chosen, the Polarstern could exit the ice pack too early, remain too far north in the Central Arctic, or even end up in waters where research is not allowed.

In order to select an adequate floe, thousands upon thousands of data points were gathered from past experiments and numerical simulations in order to predict floe trajectories. The data sets are studied in order to probabilistically predict which area(s) of the central artic will contain floes that will likely float along in the Transpolar Drift and end up in the Fram Strait at the end of the expedition. Based off the results, an area around 84-85 degrees north and 134-136 degrees east was selected as an ideal location to find a floe for the expedition. Once the area was selected, recent satellite imagery was used to identity floes of adequate size to visit by ship and helicopter to test. Amongst characteristics of interest when determining if a floe is adequate for the expedition are thickness, sea ice quality, and size. This use of satellite imagery is one example of the necessity for remote sensing and modeling in the expedition.

In addition to selecting the main floe for the expedition during the first weeks of the cruise, modeling and remote sensing have also played a crucial role in the selection of the distributed network of scientific equipment. In order for the science to be a success, it is crucial to select floes that will surround the main floe in a specific orientation. Analysis of satellite imagery is used to locate floes that are approximately in the locations necessary for the network. Once a potential floe is identified, on-site measurements and observations are used to confirm or reject the floe.

Finally, while setting up the network, it is critical to ensure that the ship does not break through floes that contain instrumentation while travelling around the distributed network. Using satellite imagery and GPS information gained from buoys that have been deployed make it possible to navigate around the instruments to avoid interrupting the environment of study and/or damaging the equipment.

Thanks to the modeling and remote sensing experts that are on the MOSAiC team, the main floe was expertly chosen and the distributed network was set up accurately and ahead of schedule.