The Screeching Sounds of Sea Ice

The Screeching Sounds of Sea Ice 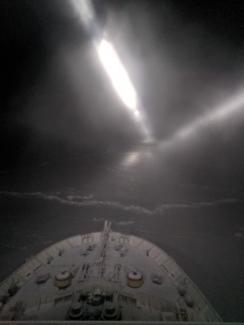 CIRES/NOAA scientist Dave Costa is on his way back to land after spending months at sea during Leg 1 of MOSAiC. In this blog, he recounts the unique soundscape he experienced as the Russian icebreaker broke through sea ice on its way back to Tromso:

"We are on our way back from completing the first leg of MOSAiC. The transfer of people and equipment went well. The views and sounds are amazing as we sail south on the Russian ice breaker Kapitan Dranitsyn.

It's like white noise in 3-D. The ship shakes very randomly and sometimes stops when we try to go through a very strong ridge that's formed. Then the ship backs up and tries again until it breaks through the ice. The sounds can be anything like twisting metal to what you might hear if small rockets were whizzing by your head—but it's just the ice breaking up and scraping along the hull. I have lots of confidence that this giant ship won't be damaged and the crew will get me safely back to land.

We are still in polar night. The horizon is not visible and we only have limited view from what the ship's light can illuminate (see image). It adds a layer of suspense. In the fog and mist you can see the beams,. It's pretty cool. Another observations: we are on a ship in the ice, so when you look out, you just see the different ice and snow shapes moving by, not the ocean waves.

I was just on the lower decks and it's very loud and like if you had giant sheets of metal and shook them to make the sound of thunder. Do that for days on end.  My cabin is on deck 7, so most of what I hear is like distant thunder. I find it soothing.