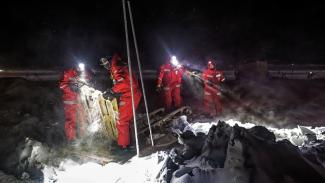 After the storm, there is lots of pressure on the sea ice, moving the ice floe significantly. To cross the lead between Ocean City and Remote Sensing Site safely, we made a bridge out of a Nansen sled and a palette. We are monitoring the ice movements from the bridge of Polarstern and also from the sea ice. Photo: Alfred Wegener Institut/Stefan Hendricks

November 15-17, a powerful winter storm blew over the German icebreaker RV Polarstern and through the scientific “cities” set up on the ice around the ship. Intense winds tore new cracks in the ice floe next to the ship, sending some ice-based instruments adrift. Amy Richman, a CIRES videographer who is on board to gather material for a National Science Foundation-funded planetarium show about MOSAiC, describes the storm and shares her thoughts on the broader scientific effort that is MOSAiC:

Storms in the Arctic are not unusual. The forecasted storm wasn’t anything remarkable for a November in the Arctic. First the wind picked up, which never stopped the scientists from going out onto the ice. Just before midnight, the 18 or so windows lining the front 180 degrees of the bridge were filled: crewman, logistics officers, bear guards and scientists watched fragments of ice once part of the same floe drift from the starboard side of the ship to the bow and then diagonally off to the left in a matter of hours. The once flat, snowy white and deceptively static view from the bridge transformed into patches of ice separated by abysmal blue cracks creating squares, triangles and broken lines in the ice. If you wanted to go outside, stand on the bow of the ship and look over the edge into the open ocean, you would see wind strewn snow whirling across the ice onto the surface of the ocean like snow sandstorms across green and black water.

From an individual scientific perspective, the storm is exciting, a chance to study the horizontal movements of ice and the ridges, piles of varying sized pieces of ice that form when the ice floes collide. It also provides the opportunity to study first year ice formation, to sample newly formed first year ice.

From an expedition perspective, the storm means an extended logistical set up period: rebuilding cable lines that power the instruments, building more tripods to hold the cables, rescuing the instruments that drifted off or were affected by the storm. The floe breaking apart was always a possibility, we just hoped it wouldn’t happen, was a statement I heard from several people.

It’s possible that the floe will drift back together and freeze again. I think about the word “mosaic” and how it implies a breaking in order to be put back together. I think about how the proof of change is embedded into the set of the experiment (expedition), which was conceived of ten years ago when the Arctic was a different place. I overheard people talking about the Sheeba expedition. Apparently, the ice floe had cracked almost down the middle of their floe too, drifted apart and then back together again. The truth is we just don’t know what it going to happen.

And lastly I think about the labor of science, when scientific knowledge is easy to see as located in the brain, disembodied. Over the past few weeks I’ve been asking all the scientists on board whether they see the physical labour involved in the set up as science or just a means to get to the science. Answers vary. Most agree that this work is science and that this work actually creates better scientific analysis later, better refinement of techniques and equipment. The work, effort and persistence involved is astonishing. I use the word hard. The scientists say challenging.

Eventually the drift slowed down. The instruments moved in a U-shape around the bow of the ship. ROV Oasis is now off to the left. Remote Sensing not far by. Met City is directly in front of the bow. Ocean City and Balloon Town stayed in relatively the same position, but a long lead opened directly next to their tents. People left the bridge to go to sleep. The work continues.