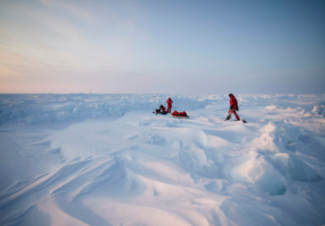 All installed instruments on board were regularly checked and were mostly operating as planned except for the fast ozone detector. The laptop was turning itself off at varying intervals. Ludovic finally identified that despite running on regular power the dead battery was the culprit. Since the replacement of the battery, the system is stable again. Temperatures in the container are normal now and the fast NOx and ozone system are back to normal PMT temperatures cooling values. In the night from Tuesday to Wednesday, Polarstern had an engine issue causing a power outage for some unknown period, but probably more than 30 minutes. The UPS kept all instruments on the 110 V circuit alive and running. In the morning the system was in backflush mode. But the scroll pumps of the fast NOx and O3 running on 220V did not restart automatically. A strong ozone smell indicated that the O3 generator of the fast NOx was apparently running and leaking air with high ozone concentrations into the container. The TEI O3 detector was in alarm and recording concentration above 1000 ppb. The pumps were restarted and the respective systems are running well again. The GCMS was also affected by the power outage since the connection between the Agilent computer and the GCMS was interrupted and the coordination between Agilent and Labview was off. Things were re-established following SOP and a new analytical sequence was restarted from scratch.

The system on board was for longer periods during the last week on backflush mode due to bad wind directions. Since Polarstern moved considerably, the heading has in the last week changed from around 130° to 90°. Westerly winds, common with lows passing east of our position or highs located to the south, now inhibit measurements of unpolluted air. As a result, flasks samples were taken on Tuesday (15/03) on the platform to the bow mast, since the wind finally turned to north.

Outside activities during this week were limited due to stormy weather on 19 and 20/03 and due to limited access to the ice floe since Polarstern was on several days unable to keep its position. Several anchor lines snapped as well as the power line to the installations in the central observatory. Since 23/03 power has not be re-installed and today most central installations (ROV, balloon, ocean) as well as MetCity run permanently off power from generators. Local pollution may now be an issue also for wind directions, which were previously considered clean. Chamber measurements were repeated on the first-year ice at the dark Dark Site on Sunday (22/03), which can be linked to the ice coring by the BGC group at the same site on 21/03. They encountered rafted floes with overall ice thickness around 3 m with intermediate slush layers. On 21, 22, and 24/03 ozone profile measurements with the tethered balloon were planned. These were cancelled on 21/03 due to the interrupted power lines to the central observatory. Only on the following days generator power was established for the winch allowing profile measurements. On 22/03 we observed somewhat reduced ozone concentrations between 15 and 20 ppbV until the maximum altitude of 650 m. concentration dropped further in the lower 100 m, which were topped by a strong temperature inversion of +10 K. However, low ozone concentrations close to the ground may be due to the impact of local pollution during the previous days. The profile on 24/03 started with no ozone on the ground, a maximum around 15 to 20 ppbV around 200m, a further layer of very low ozone up to 400 m altitude and a strong increase above reaching 40 ppbV at 600 m altitude. A similar profile, but with somewhat higher ozone concentrations at the ground and at 400 m was obtained from the regular ozone sonde on the evening of 23/03.

We were following the trip of the Kapitan Dranitsyn and Admiral Makarov through the ice and learned that our colleagues may arrive in two days in Tromsö and will be transferred with a charter flight to Bremen awaiting the return to their home countries.

We were further informed that the legs 3 and 4 are somehow regrouped and that the exchange from leg 4 to 5 planned with the Swedish ice breaker Oden is supposed to go ahead as scheduled. Since the Oden can only exchange 50 persons at a time, this requires two trips of the Oden to Polarstern since in total approximately 100 persons will be exchanged. According to the original schedule, the Oden may reach the Polarstern for the first time in June. However, other earlier exchange solutions are under discussion.

Despite this uncertainty everybody onboard is doing well.