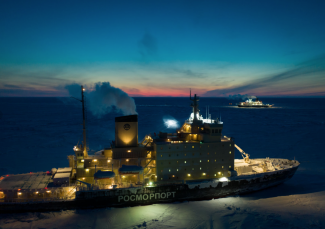 Last Tuesday the scientific parties of leg 2 and 3 moved from Polarstern to Kapitan Dranitsyn and vice versa. Since then leg 3 has taken over the responsibility for the scientific operations. Cargo transfer between both ships still continued until Thursday. On Friday morning the Kapitan Dranitsyn started its travel back to Tromsö after a farewell party on the ice on the evening before. Its current position is around 87.2° N and 43°E.

Except for the DMS analyzer, all installed instruments on board and at MetCity are regularly checked and are operating as planned. Bottles with compressed nitrogen for the puff system were replaced at MetCity and in the container.

During the period, when the Kapitan Dranitsyn was anchored close to the Polarstern, the conditions were for longer periods not favorable for atmospheric measurements: wind direction within the excluded sector due to emissions from the Polarstern, winds from the east polluted by either the Kapitan Dranitsyn, Pistenbully operations, cargo transfer, or Skidoo shuttles between both ships, etc.; and stable and calm conditions with low wind speeds and strong temperature inversions.

We used the first week for three CO2/CH4 chamber measurements at the SNOW 2 site, on thin ice on a refrozen lead to the Northeast of Polarstern, and on the first-year ice at the Dark Site. With the lead measurements we intended to characterize processes on newly formed ice, since we found a location with approximately 12 cm thick sea ice covered by 3 cm of snow. The Dark Site measurements were performed in parallel to static chamber measurements of DMS performed by Jacqueline Stefels (University Groningen, NL). These measurements were coordinated with the BGC and ECO groups, who anticipated coring activities at the same sites on Monday. Unfortunately, the coring was cancelled due to the extreme meteorological conditions with temperatures of -38°C and wind speeds around 11 m/s. On Thursday we successfully launched the ozone sonde with the tethered balloon together with the aerosol package from the British Antarctic Survey.

At our current position (87°50'N) we expect the sun to rise the first time over the horizon on next Friday.

Everybody onboard is doing well.