Weekly Update from Bariteau and Jacobi: Preparing to leave the floe

Weekly Update from Bariteau and Jacobi: Preparing to leave the floe 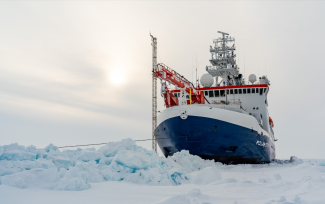 Ludovic Bariteau and Hans-Werner Jacobi have been onboard the RV Polarstern for several months now, and are thrilled at the measurements they have been collecting. Photo Credit: Christian Rohleder

All installed instruments on board were regularly checked and were mostly operating as planned. Some troubleshooting was necessary. Because of high temperatures close to 0°C and high humidity, the Nafion drier was put in place for the Picarro sampling in the container on 16/04.Since temperatures dropped again, it was removed on 20/04. The inlet line for the fast O3 sampling close to the pump was worn out due to high temperatures in the closet for the pumps. The last 20 cm were cut and the tube was reinstalled. The temperature of the PMT for the NOx system rose several times between 19 and 21/04. We worked on the water flow, the ventilation, the fans, and so on. Since 21/04 the system is again able to keep the required PMT temperature of -30°C. Similarly, the fans for the ventilation of the water reservoir did not operate properly and, thus, the water trap temperatures were too high. After cleaning the fans and restarting the ventilation it seems to be working better now. The Tekran showed a too high baseline deviation for the lamp. The lamp was readjusted on 21 and 22/04 resulting in a lower baseline deviation. In general, temperatures in the container and on the deck started to rise early this week. On 21/04 the crew turned on the ventilation system on the E-deck, which helped to reduce the overall temperatures inside and outside of the container. We did the flask sampling on 16/04.

The situation at MetCity became again very dynamic. It was not accessible any more on 19/04 and the power lines needed to be cut. Before, the Picarro was shut down remotely and the instrument was recovered on 20/04 pulling it over several ridges and leads. The O3 detector is also down since 19/04 and was restarted on 22/04 running now on power from the local generator.

During the last week ozone was very variable and we encountered concentrations up to 50 ppb on 16/04 and more than 40 ppb from 18 to 21/04. The high concentrations were related to warm air masses transported from the South with air temperatures well above -5 °C and relative humidity between 80 and 90 %. However, arctic air masses quickly led to decreasing ozone concentrations. The ozone profile obtained on 17/04 showed very strong ozone gradients with less than 10 ppb on the ground increasing to values above 35 ppb at 60 to 80 m.

On 19/04 we harvested the data of all instruments and transferred them to the ship’s central storage.

We were informed that Polarstern will leave the floe on 15/05 to arrive at Svalbard for the exchange with the leg 4 personnel around 23/05. Packing and preparation for sailing will start on 05/05. It is needed to put the bow mast in its vertical position and remove the sensors for the flux measurements from the mast, but keep the other measurements running as long as possible. At Met City the rack with the ozone detector and all other instrumentation will be recovered before leaving. It remains to be seen if the tower and the hut at Met City will be removed. If that is the case, all inlet lines will also be recovered.

Currently, Polarstern is at 84.1°N with an estimated distance to the marginal ice zone of around 300 nautical miles. Drifting was fast the last days, but today it is slow with an average speed of approximately 0.3 kn.