Weekly Update from Bariteau and Jacobi: Research challenges and uncertainties

Weekly Update from Bariteau and Jacobi: Research challenges and uncertainties 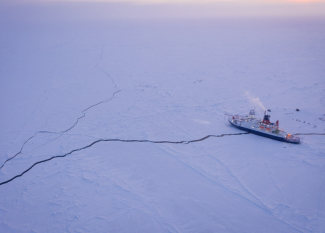 All installed instruments on board and at MetCity are regularly checked and were mostly operating as planned. However, temperatures inside the container on board as well as on the E-deck increased during the week. This caused difficulties for the fast O3 and the NOx system to properly operate and the slow O3 detector heated to above regular operating temperatures. We asked first to turn off an extra heater, which was placed behind the containers on the starboard side. We also opened the container doors and windows and rearranged a few things inside and outside of the container to establish a better circulation. As a result the temperature in the container dropped again and all instruments cooled down to regular operational temperatures. Moreover, the mercury detector showed differences for the two converters, which we diagnosed with the help of Helene as a problem of the gold traps used to accumulate the mercury. The traps were replaced on Saturday (14/03) and the detector is again observing coherent concentrations. Flasks samples were also taken on Saturday (14/03) on the platform leading to the bow mast.

Outside activities were less successful during the last week. After the chamber measurements at the Dark Site on the first-year ice on Sunday (08/03), outdoor activities on Monday (09/03) and Tuesday (10/03) were cancelled due to bad weather conditions with low temperatures and high wind speeds. On Wednesday (11/03), Hans-Werner supported the ice team for the regular snow sampling at the A5 site in the Snow 1 area. This sampling included a full snowpack profile for iodide. Since some 1 meter wide and refrozen cracks were encountered close to the Snow 1 area, we intended to perform CO2/CH4 chamber measurements on the relatively thin ice of these cracks. However, these small cracks widened considerably in the following hours and additional cracks formed. A larger lead formed between MetCity and the Leeds 23-m mast making MetCity inaccessible from the Central Observatory. The power line to MetCity was cut leading to an immediate and unregulated shut-down of all instruments. On the following days, it was possible to cross the lead and power was reestablished for the scientific instrumentation with local generators and a barrel of fuel was transported to the hut. Due to the limited capacity of the generators the heating was not turned on and temperatures in the hut continued to decrease. As expected weather conditions limited the access to MetCity and the resupply of the generators. Further power outages occurred in the MetCity hut. Therefore, the Picarro instrument was returned to the ship on Thursday (12/03). The ozone detectors were turned down, but continue to stay in the MetCity hut. Since then the arrangement of the sites and floes has been modified completely due to intensive lead and ridge formation. Also the Polarstern moved considerably and the access to the sea ice was closed for longer periods. Most of the more remote sites are not accessible anymore and we are awaiting more stable sea ice to regain access to these sites. The established runway does not exist anymore. Since the leads and ridges between MetCity and the Leeds tower continue to threaten both sites (one wind shields of the ARM disdrometers was destroyed by a newly formed ridge), it was decided to relocate on Tuesday (17/03) a large number of the ARM instrumentation closer to the MetCity hut and to dismantle the Leeds tower.

However, the newly formed leads also put us in the position to perform CO2/CH4 flux chamber measurements on new ice, which we performed on Sunday (15/03) and Monday (16/03) on the lead towards MetCity. The Sunday measurements resulted in the biggest signals in CO2 and CH4 observed so far with the chamber. The Monday measurements were performed in a coordinated manner with members of the ICE, BGC, and ECO teams and are subject of the MOSAiC WebApp entry on 17/03.

We were informed that on Saturday (14/03) the Kapitan Dranitsyn and Admiral Makarov met at about 85°N for fuel transfer operations, which are expected to last for two to three days. After refueling Kapitan Dranitsyn is expected to continue its journey to Tromsoe. We were further informed that the airborne campaign planned for March was cancelled due to the Corona virus. It is now also clear that the planned exchange between leg 3 and 4 will not take place as planned. At what time and how an exchange of scientists and crew will be possible is at this moment completely unclear.

Despite this uncertainty everybody onboard is doing well.