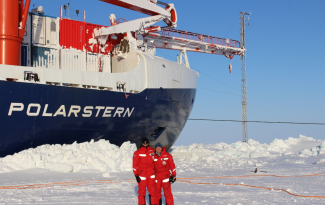 Ludovic Bariteau and Hans-Werner Jacobi are part of the team measuring greenhouse and trace gases in the atmosphere from the vertical mast installed at the bow of Polarstern. Photo Credit: John Bilberry

All installed instruments on board were regularly checked and were mostly operating as planned. The PMT temperature of the NOx detector was too high on 03/04, but is stable again after exchanging the pump for the water cooling system. Moreover, the deployment of the mast kept us busy on 02/04. Only after two unsuccessful approaches, we finally succeeded to deploy the mast into its vertical position in early afternoon. Since the lower end came close to a ridge, we intended to remove the lower section of the mast by climbing up the mast. While assessing this possibility together with the leader of the logistics team, the ship and the ridges started to move again. When the ship backed up, the bow and the mast was somewhat lowered touching the ridge underneath for a short moment. The mast twisted slightly, but the ship backed up further moving the mast away from the ridge. During the following night, the area in front of the ship was reorganized and since then a more stable situation developed: ridges along the port and starboard side of the ship leaving the mast in a triangular area with more level ice underneath. We did the flask sampling on 03/04.

Ozone continued to be low the last week with prolonged periods without any ozone (e.g. from 01 to 04/04). The traditional view, e.g. stable, sunny conditions = low ozone and windy, cloudy conditions = high ozone does not apply. We rather have episodes, during which ozone increases to somewhat higher values, but drops quickly again to zero. It appears that these drops are not related to any specific meteorological or ice conditions. To further study the ozone distribution, we jumped on any occasion to measure profiles with the tethered balloon. We were able to measure three ozone profiles on 06 and 07/04 ascending to different altitudes. In all cases ozone was more or less absent from the ground to the highest altitude, even when the balloon mounted to 900 m on the afternoon of 07/04. On the same evening a regular ozone sonde was launched, which confirmed that ozone only increased to background values above an altitude of ~1100m.

We also did further CO2/CH4 flux chamber measurements on 06/04 in parallel with Liyang Zhan, who deployed Daiki Nomura’s steady state flux chamber. The measurements were done on a refrozen lead at the stern of the ship with a slushy layer on top. Fluxes were very strong. Additional samples for DIY and CH4 in the slush and ice were taken.

Since the chief scientist decided on 06/04 that the ship will not be relocated to the opposite of the floe and since the situation at MetCity stabilized during the last days, we deployed again the TEI and Picarro instruments in the MetCity hut on 08/04. Ozone data are collected since around noon on 08/04, and the greenhouse gas measurements are running since the morning of 09/04.

Currently, Polarstern is at 84.4°N with an estimated distance to the marginal ice zone of around 315 nautical miles. Drifting has slowed down in the last days and we move with a speed of approximately 0.2 kn.