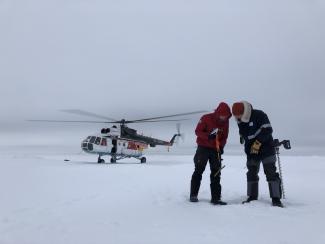 Jakob Belter and Jan Rohde of AWI determine the thickness of the ice floe equipped with drill and gauge. Photo: Katharina Weiss-Tuider / AWI

By Byron Blomquist/CIRES and NOAA

Today is day 3 of the official MOSAiC drift.  Over the past week a location for the Central Observatory was finalized and we spent a couple days transferring cargo and personnel from Federov. During the rendezvous with Federov a mother polar bear and yearling cub spent quite a bit of time investigating the ships.

Ultimately, the decks and holds of Polarstern were at their limit with more than 500 tons of scientific and support equipment when we made the transit to the selected site.  On Saturday the ship moored to the ice flow and we began the process of surveying the site and establishing ice camps for the atmosphere, ocean, remote sensing, ROV and tethered balloon activities. Today the helicopter placed power node transformers at the ice camps and trails were flagged for foot and snowmobile traffic between the sites.

Jacques and I are still working on sampling inlets for the ship flux and trace gas systems.  These are mostly fabricated but the tower installation remains. The weather forecast is calling for gale force winds tomorrow, so Wednesday is probably the earliest we can start on the outdoor work. This first big storm should give us some idea how well the ice floe hold together.

The Federov crew finished installing equipment at the L1 remote node yesterday and is now working on L2, though weather may also slow them down a bit.  Steve has the CO2/CH4 chamber flux system on Federov and may get the chance to try it out on the ice during the L2/L3 deployments, with
help from students participating in the MOSAiC school.

So, thing are going smoothly so far.  Hopefully by next week I can report that we are actually collecting data...