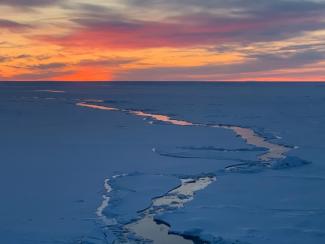 A crack can turn within hours into a kind of ridge and then open again. This is a perfect example of the dynamics of the MOSAiC floe. Photo: Alfred-Wegener-Institut / Sebastian Grote

Today was Day 24 of the cruise and the 10th day of the drift.  The setup phase is drawing to a close and our colleagues who came for the install will leave on Federov this Thursday.  With that, the measurement phase begins. For our project, the ship bow tower was raised on Saturday and the sonic anemometers and Licor are running. The heated gas sampling lines are also installed and several gas analyzers are now on-line, including fast and slow ozone, NOx, VOCs and mercury. The CO2/CH4 flux system could be started at any time.

The ship is oriented with the bow toward the mean climatological wind direction, S-SE, but for the past two weeks wind has been persistently from the N so we aren't getting usable data from the trace gas or flux systems at the moment, and this looks to continue for at least the next few days. The gas inlets are running in backflush mode with clean air for now to prevent contamination from the ship's exhaust, so the analyzers are measuring zeros.

The Met City site is coming along.  The hut is completed, with electricity, lights and heat. The tower is in progress. Other on-ice sites for Ocean City and the ROV are also nearing completion.
Temperatures are steadily dropping and it was about -25°C Sunday when I finished wiring up the tower cables. I frost-nipped my fingers a bit.

Thus far the drift trajectory is opposite to the direction we want to go, and we are now at 84° 45'N, 134 26'E, SE of our original starting point. Northerly winds may be to blame here. Hoping that turns around soon as we don't want to end up in Tiksi, Siberia.

The two polar bears that have been in the area returned twice over the past week, triggering an orderly evacuation of all on-ice work parties on Thursday and delaying the start of work on Saturday. The bear guards chased them away the second time and we are all hoping they have moved on since the interruptions have slowed some of the setup work.

The IR camera system on the bridge is capable of spotting bears in dark or dim lighting conditions at a distance of a few km, which is a great asset for tracking them. But the IR camera also reveals surprising and beautiful details in the ice itself. Footpaths and snow machine tracks show up as brighter traces across the ice floes, showing that even small disturbances of the thin snow cover yield enhanced heat loss from the thickening ice and warmer water below.  The open leads are particularly striking in the IR image and remind me of the glowing lava floes on Hawaii's Big Island, radiating heat into the cold night air.

There is a large lead adjacent to the ship and extending forward from the bow. This has opened, refrozen and closed a few times over the past week and presents us with ideal conditions for flux measurements over a wide variety of new ice and open water conditions (when the wind is in the right direction).  I'm hopeful this feature remains active throughout the winter.

Our 'daylight' now consists of several hours of extended sunset conditions. The past two days have been largely clear, calm weather and we've had fantastic moonrises over the ice pack.  Yesterday the moon emerged above the horizon as a blood-orange ball, squashed and distorted by refraction in atmospheric layers near the surface.  The full moon also
contributed to larger tides and the ice was quite active, with new cracks developing in our floe.  Wish we had the bandwidth to send photos.