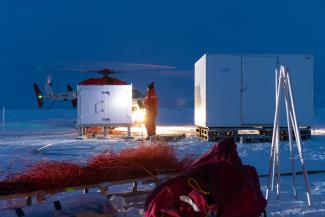 A crack in the sea ice October 19 separated this research site on the ice from the Polarstern. AWI image by Marcel Nicolaus

This Thursday will be the 'official' start of routine sampling and observations for MOSAiC which will continue for the next year.  In reality, some instruments have been operating for several days already and preliminary snow and ice sampling surveys have occurred over the past two weeks.  Other measurements will not be on line for some time yet.  So, the actual process of getting the experiment started is more gradual.

On the ship, our systems for turbulent flux and trace gas analysis began full operation over the past week.  Wind direction has been favorable for several days and we finally have some real data to look at.

Yesterday and today, Steve and I conducted field trials of the CO2/CH4 flux chamber system near the ship.  Operating in severe cold and wind is difficult and we're refining the procedures and setup to reduce the need to remove gloves and fuss with little fittings and connections.  It's clear that each deployment of the flux chambers will require many hours standing in the cold, but so far the portable Licor gas analyzers seem to perform very well in these conditions.  We'll take the CO2/CH4 chamber system out in conjunction with the ECO group ice coring team sometime in the next week or so.

We had a couple more bear visits yesterday afternoon and this morning. Possibly the same bear, and both times it was chased off by the helicopter, interrupting on-ice work for a couple hours.  We all understand the need to stay vigilant at all times when working away from the ship.

It was necessary to situate the ice camps on thick multi-year floes to help ensure their survival during the summer melt season.  I had wondered if this would limit our chances to take measurements over thin ice conditions in the 'new Arctic'.  These doubts were put to rest this week when a large crack appeared in thin ice a few meters from the Met City tower base, in fact going between the tower and one guy anchor.  The tower base is sitting in fairly thick ice, but the area to the south is all new ice and we're evaluating if the tower should be moved a few more meters into the safe zone.  In any case, we are well positioned for measurements over thin first-year ice from this site.  The ship bow tower also overlooks an extensive area of active leads and ridges in thin ice.  In this respect, site selection for the Central Observatory has met one of the most important goals for MOSAiC.

Image above: October 19. Overnight, a new crack between the vessel and the ROV Site opened up and the site was disconnected from our main floe and drifted. From the bridge, we could see how our ROV installation moved constantly from the starboard to the port side of the vessel. In the morning, the ROV Team decided to recover all of the valuable equipment from the site to save it from further drift. Our helicopter team operated a swing load recovery, bringing back the ROV, its control hut and power hub. Alfred-Wegener-Institut / Marcel Nicolaus (CC-BY 4.0)