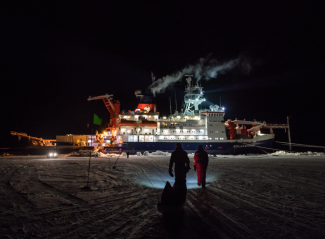 We are now into the second half of leg 1 and are more or less settled into routine observational activities.  Our drift continues to the W, a bit S of the desired course. This is mostly due to persistent easterly winds, which we hope will shift to southerly before too long.  The relative wind
direction with respect to the ship is still 90-120 degrees to-port, which is not ideal for turbulence measurements from the bow but is at least clear of exhaust contamination, so all systems have been operating normally.  Based on what I've seen from the mass spectrometer, there's no DMS in the air at this time of year, which isn't too surprising.

The Met City CO2/CH4 flux system has been running for about a week now and seems to be working well.  Several small cracks in the ice appeared around the ship and at Met City but have not developed into anything serious yet. The ice seems to be stabilizing after several weeks of -15 to -20C temperatures. No sign of polar bears for the last few weeks.

For those of you with an AWI login, I encourage you to follow the online MOSAiC Log.  Matt Shupe recently uploaded a detailed map of Met City, showing the position of various installations. The Log has photos and reports on the progress of the project that we don't have bandwidth to send via e-mail. This is all valuable information for those preparing to come out on legs 2 and 3.

This week I began work on the matlab and python code to process the raw data and begin routine monitoring of data quality and basic parameters. Given the number of instruments deployed it may take some time to get the quick-look analysis up and running. I hope to be able to share some results in the near future, at least on the Log if not by email.