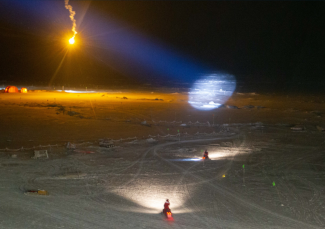 We've had a significant change in weather conditions since Sunday, with
strong southerly winds and somewhat milder temperatures.  Conditions this
morning are 11 m/s winds at 197° with an air temperature of -17°C.  This
provides ideal measurement conditions from the ship bow (heading 203°) and
at the Met City site, with a southerly fetch over mostly new ice.  The ice
drift has now turned sharply to the N to NE and speed increased to 0.4
kts.  This puts us back on course for the N pole, and away from the
Russian EEZ.

Steve and I had the CO2/CH4 flux chamber system out on the ice again over
the past week, sampling over a newly refrozen lead S of the ship on
Sunday.  We plan to take the system out a couple times per week now in
coordination with the Biogeochemical Gases and Sea Ice groups.  We've
located the components for the ozone chamber and will try to get that
figured out over the next week.  Steve has also been spending time getting
the DMS traps and GC analytical system running reliably.

I've made some progress with data analysis scripts and  now have basic
quick-look plots for most of the met and turbulence data.  I'm working on
code to evaluate the eddy correlation gas fluxes.  DMS concentrations are
near zero based on the mass spectrometer output.  In clean wind
conditions, CO2 and CH4 concentrations appear to be at the N Hemisphere
background level with very little variability.  We should be able to
estimate an upper limit on air-sea fluxes of these gases from the EC data.
Ozone is about 35 ppb.

A couple days ago Steele Griffiths (DOE ARM) and I were at the Met City
hut servicing instruments when a large polar bear appeared in the ice
ridge area ~50m behind the hut.  Fortunately, our bear guard Hans spotted
him quickly and the bear retreated after a few rounds of flash bang flares
from Hans.  Steele and I returned to the ship without incident on a snow
machine, but this was a good reminder not to be complacent about the
bears.  The bear remained near the ship for some time but was ultimately
scared off when he encountered the trip wire barrier around the Central
Observatory site and set off a flare rocket.

On Sunday while out on the ice with the chamber system, Steve and I
watched a glorious red moon rise in clear, calm conditions, with the
brightly lit ship in the foreground and satellites crossing the sky over
us; plenty to look at while tending the flux chamber (and watching for
bears).