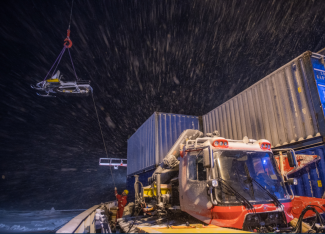 The last several days have seen some dramatic developments and some
setbacks.  On Saturday a strong arctic cyclone moved through the area,
bringing sustained winds up to 20 m/s for many hours, first in an westerly
direction, then veering to northerly.  This mostly shut down outdoor work
for two days.  Observing one of these events was a key objective of the
atmosphere team.

Our drift rate increased to > 0.5 kts to the E and then to the S, at one
point up to 0.8 kts.  We are now well S of our position a week ago and are
once again on a track toward Siberia.

The large multiyear floe which was selected as the backbone of our Central
Observatory split in two on Sunday, with a significant shear zone
developing just in front of the ship in a port-starboard direction.  This
lead has opened and closed a few times over the past 48 hours and the
shear between the two halves is currently offset by as much as 70-100 m.
The block with Met City, ROV City and the Remote Sensing Site are on the
opposite side of the crack and a large ice ridge is developing between
Remote Sensing and Ocean City.  The Remote Sensing site was heavily
damaged by ice movement and a number of large instruments were moved to
safety on Sunday.  The site will need to be reestablished at another
location when the situation stabilizes.

The power and data links to Met City and all other sites on the opposite
side of the lead were severed early AM on Sunday.  Further ice movement
brought down the 30m met tower at Met City early this morning.  Otherwise,
most of the equipment installed at Met City is intact and appears to be on
stable ice, but only a few instruments are operating, powered by
intermittent backup generator supply.  Our CO2/CH4 flux system at Met City
is down and will not operate until ship power is restored to the site.
Met City was originally located about 800m off the starboard beam of the
ship at an ~ 2 o'clock bearing, but as of today is drifting toward the 1
o'clock position.  Because the ice is still moving we do not know when
power and normal operations will be restored.

Most of the measurement systems on the ship are functioning and we are
able to keep things sampling normally whenever wind direction is
favorable.  We plan to continue deploying the chamber flux systems at
least 2 times per week.