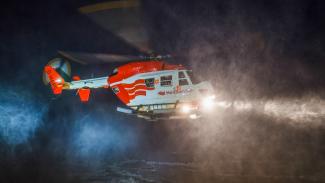 The helicopter leaves for a team ATMOS flight to one of the distributed network sites just before the storm. Alfred-Wegener-Institut / Stefan Hendricks (CC-BY 4)

by Byron Blomquist, CIRES and NOAA

The passage of two arctic cyclones last weekend was a unique opportunity to make atmospheric observations of a poorly understood weather system. Our measurements from the ship have continued normally throughout the past week when wind direction conditions permit. Steve and I made a couple trips out on the ice with the CO2/CH4 flux chamber, and Steve spent the better part of the week getting the ozone flux chamber running. We hope to give that a trial before the end of this week.

There were no major shifts in the ice pack over the last several days but the situation remains dynamic, with leads opening and closing on a daily basis. The remote sensing site has been dismantled and will be rebuilt at a new site. The ROV site is partially operating on generator power. The Ocean City site was dismantled and moved to avoid an ice ridge, but is mostly operational again.

The situation at Met City is tenuous. Met City is still without a power line but instruments on the tower are operating part of each day on
generator power and we've been able to access the site twice daily to refuel. It is sometimes possible to reach Met City by snow machine, but often access is by foot only. The exact route changes daily, depending on ice conditions. Met City is currently only about 400m from the ship, but the route over ice is probably closer to 1 km. Our measurements there are still shutdown and we don't have a good estimate yet for when the power and data lines will be reestablished.

After the large shift in the ice floe on 19 Nov, the Met City, ROV and remote sensing sites moved about 600m to the SE, across the bow of the ship. Met City is now located directly in front of the bow and the remote sensing site will be reestablished in this same general area.  Ice in front of the ship is now a complex system of blocks and ridges. The ROV site is now off the port quarter of the bow. So, the formerly compact Central Observatory site now spreads over a much greater area and the bow of the ship is largely surrounded by on-ice infrastructure. If the ice solidifies in this state, this will be the arrangement for the remainder of the project. This will impact the clean wind sector for measurements from the bow of the ship, but there should still be many hours per day with minimal activity on the ice.

Despite the challenges we've faced on leg 1 many measurement activities have been largely unaffected and we will come back with a unique and significant dataset. We are now nearing the transition to leg 2 so the focus over the next two weeks will gradually shift to the logistics of cargo transfer, personnel exchange, and transferring as much information as possible to the incoming crew. We plan to have as much of the infrastructure back to operational conditions before they take over.