Are you interested in MOSAiC-related educational resources but don’t know how to get started? Join MOSAiC curriculum developer Jon Griffith for “MOSAiC office hours”. Starting Monday, April 13th, Jon will be available via Zoom Mondays and Wednesdays from 12 pm – 1 pm MT to discuss implementation strategies, answer questions, and point you to the latest MOSAiC curriculum, virtual field trips, real-time datasets, videos, and other Arctic resources. Please note that this is an informal event and that you are encouraged to come and go as you wish!

We challenge YOU to create a piece of art (drawing, sculpture, poem, etc.) of your favorite Arctic animal.

Submit a photo of your artwork here to be featured in the Museum of MOSAiC Art!

On the morning of January 28, 2019, thermometers on board the Polarstern measured the Arctic air temperature to be -35.1°C (-31.2°F), the coldest it had been during the MOSAiC expedition up to that point. Depending on the wind, it can take as little as 5-10 minutes of direct exposure for humans to experience frostbite in these temperatures! To stay safe in the frigid Central Arctic, especially during the sunless Arctic winter, MOSAiC team members must wear specialized gear.

The human body is not naturally adapted to live and thrive in such cold and harsh conditions; rather, we adapt in other ways, like wearing warm clothing or insulating and heating where we live and sleep. In this time-lapse video, two MOSAiC team members demonstrate their routine for preparing to go out on the Arctic sea ice. Video credit: Anne Gold 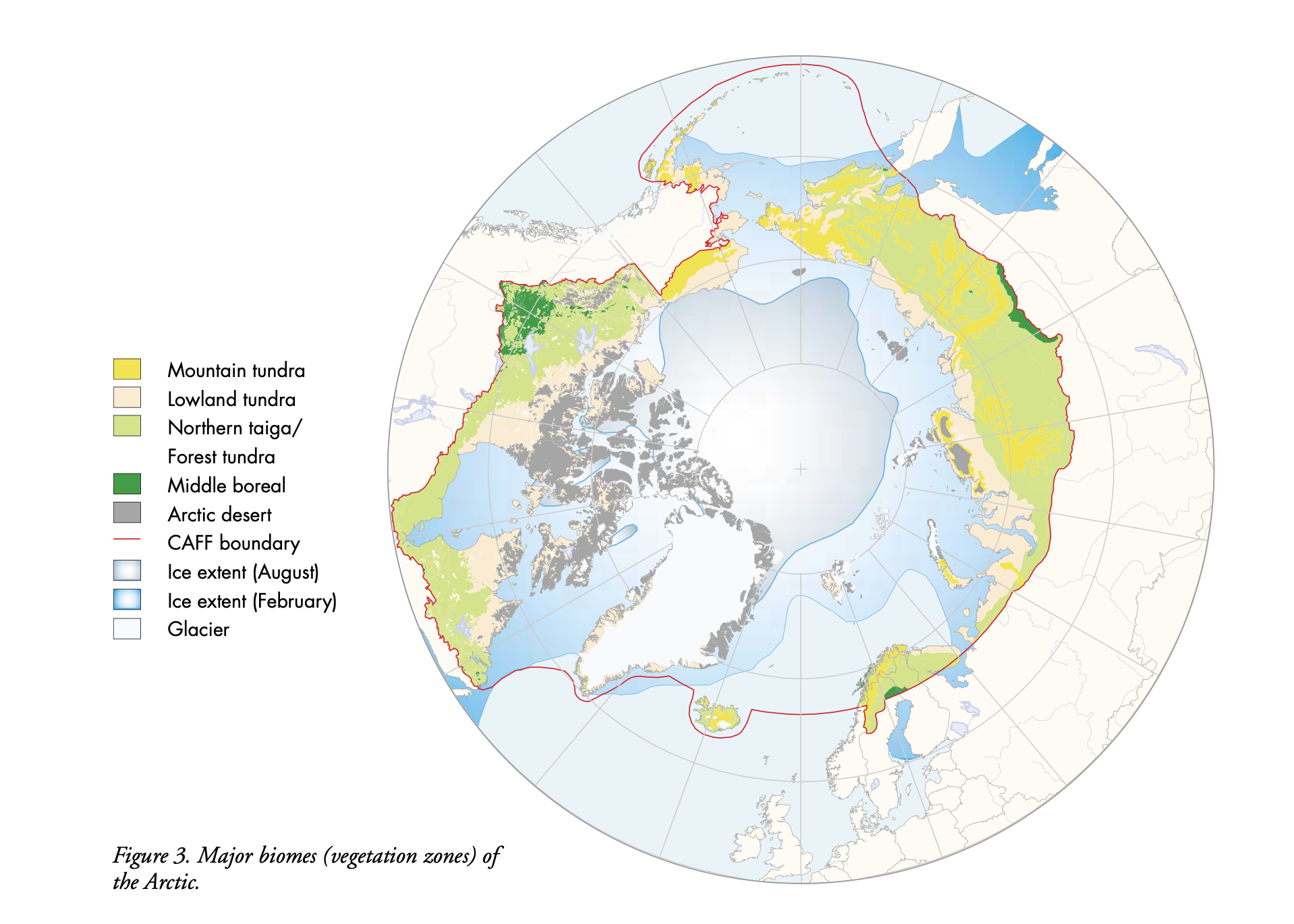 The Arctic is not a singular physical setting. The Arctic’s landscapes are varied - mountains, plains, glaciers, swamps, and even arid deserts. And there are even more habitats we could describe below the sea ice in the Arctic Ocean. But there are similarities in climate throughout the Arctic, as the region generally experiences short, cool summers and long, cold winters as well as extreme seasonal variations in sunlight. As a result, the Arctic has a variety of flora and fauna that have unique adaptations to their environment. Map credit: Arctic Flora and Fauna

Arctic flora and fauna have a variety of morphological adaptations that help them survive in various Arctic habitats. Read about several of these morphological features below, and try to figure out what their function is (how they make the organism adapted to their environment):

Feature: Mountain hares that live in the Arctic have very large, very furry back paws. In fact, their back paws are twice the relative size as their European counterparts! Photo credit: Bouke ten Cate

The mountain hare’s back paws act like snowshoes, distributing their weight across a larger area of the ground so that they don’t sink when walking over snow.

The Rock Ptarmigan’s plumage is its camouflage. In the winter when the ground is covered in snow, the ptarmigans blend in by sporting white feathers. In the summer, when the snow melts and the gray/brown ground underneath is exposed, the ptarmigans change their feather color accordingly so that they still blend in.

Feature: The Svalbard reindeer’s weight varies significantly between the summer and winter. Svalbard reindeer can increase their weight by as much as 40% going into autumn, with much of that weight gain stored as fat. Photo credit: Decokon

Food is much more available in the Arctic spring and summer than it is in the fall and winter. Many animals like the Svalbard reindeer thus accumulate fat reserves when food is abundant in preparation for when food will be scarcer.

Feature: Many insects in the Arctic, like bumblebees, butterflies, and aphids exhibit melanism, which means they are dark in color. Photo credit: D. Gordon E. Robertson

Feature: Many Arctic tundra plants, like Arctic moss, have small, short rootlets that grow more horizontally rather than deep down into the ground. Photo credit: Fiona Paton

Much of the ground in the tundra is permafrost, meaning the soil is permanently frozen year-round. Plants’ roots have difficulty penetrating the hard, frozen ground, so instead they are shorter and spread out horizontally.

Life in the Central Arctic 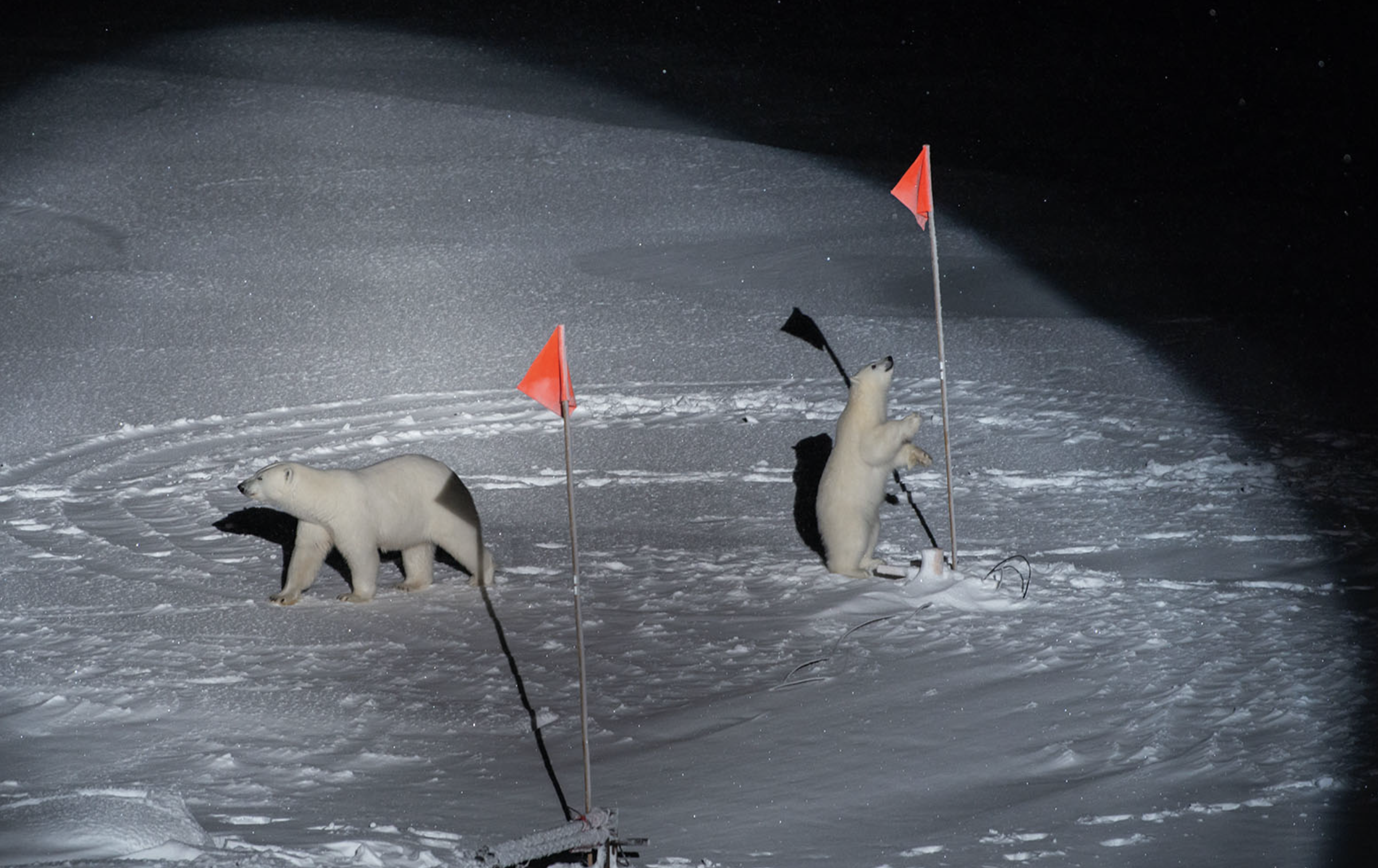 The Arctic organisms you read about above exist for the most part on Arctic land. But remember that the Arctic itself is an ocean surrounded by land. Thus, MOSAiC participants aboard the Polarstern in the Central Arctic will not actually see most of these kinds of things until they leave the Central Arctic. But this doesn't mean they aren't seeing any signs of life at all - in fact, MOSAiC photographer Esther Horvath of the Alfred Wegener Institute recently won a World Press Photo Award for this picture she took of a curious mother polar bear and her cub checking out the MOSAiC ice camp during Leg 1 of the expedition. Photo credit: Esther Horvath

And there is a lot more life in the Central Arctic than you might think...below the ice! There are several MOSAiC scientists who are interested in studying what plants and animals live in the Arctic Ocean and underneath the Arctic sea ice - more on this next week!

Matthew from Middleton Middle School wants to know: Do you only see polar bears in the Arctic, or do you see other wildlife? 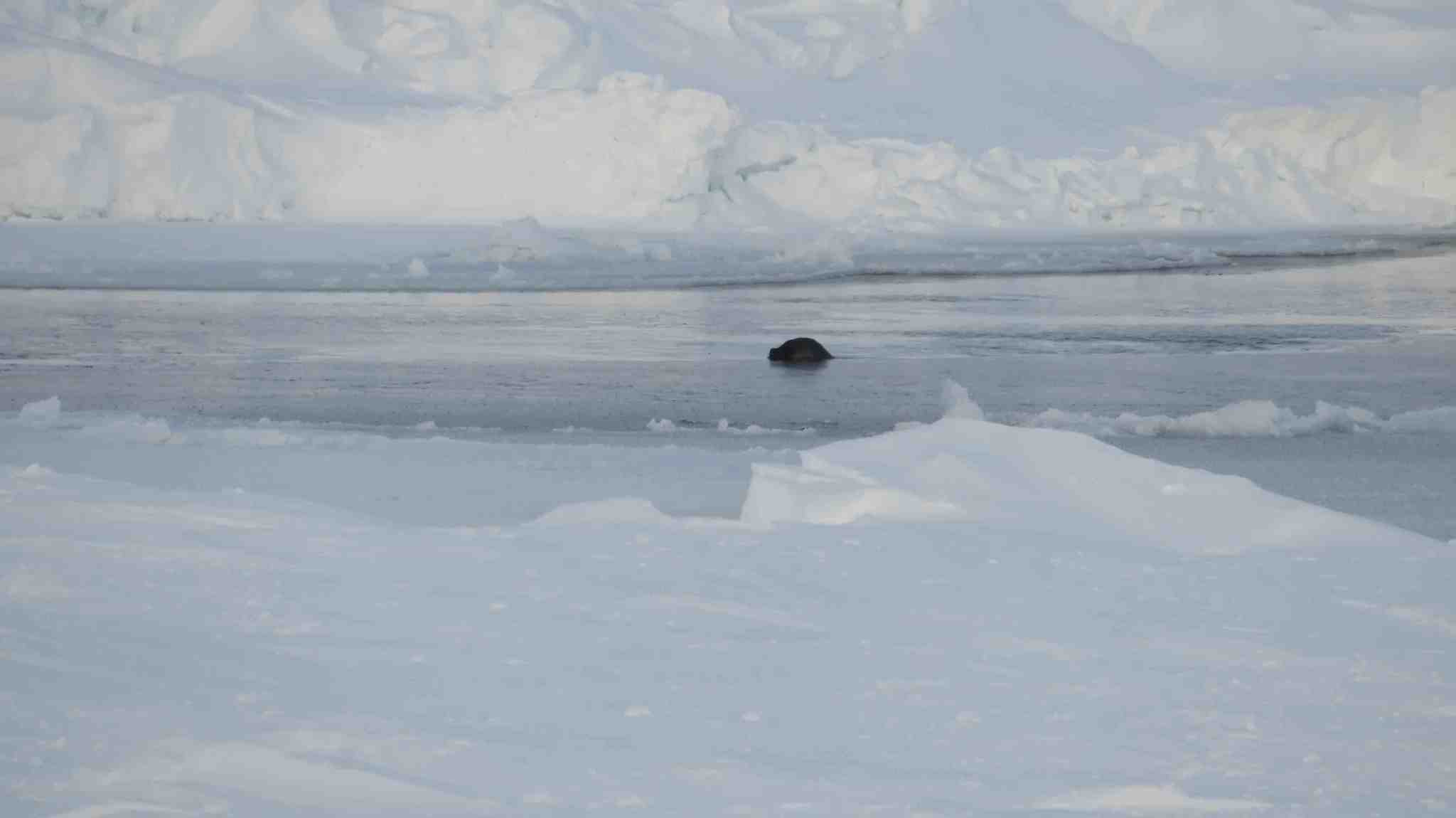 "Since I was feeling pretty cooped up inside towards the end of last week I decided to start to make more of an effort to get outside and bear guard when we couldn’t fly [drones], so I volunteered to go to Met City with some folks to do some routine checks...On this day I was out, a lead (crack in the ice) had opened up from the front of the ship, curving around DroneVille and then along the side of Met City, running right along our infrastructure, but not cutting anything off or causing any damage. This was a nice lead. Beautiful and non-destructive. Not yet frozen over, so still having open water, the wind creating gentle ripples. It was thrilling to stand by it, knowing that just below was 4 km of cold darkness to the sea floor, but just a few feet away from the edge, standing on the ice, I was safe...As I stood watch for bears, I looked over towards the open lead and saw a small black dot. I didn’t think much of it, but looked closer out of curiosity. Then I realized what it was. A seal! Since the water had not frozen over yet, it provided an opening for this little guy to pop up for some air. I was flooded with joy and exhilaration at the site of my first wildlife out here. Sometimes I forget we share this space with some other creatures. I felt so lucky to have been there at just the right time to capture this rare moment. We named the seal Lucy." Photo credit: Julia Schmale

-Gina Jozef, University of Colorado Boulder, member of MOSAiC Team Atmosphere and UAV (drone) pilot. Gina is currently on board the Polarstern for Leg III of the expedition. This is an excerpt from Gina's blog, which she updates regularly.

How do fish keep from freezing in the cold Arctic waters? What role do people play in the Arctic food chain? Learn the answers to these questions and more in this interactive learning experience about Arctic ecosystems.